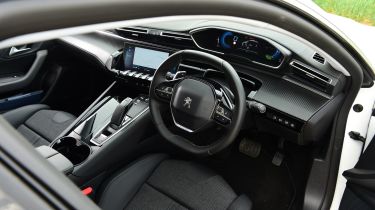 Even a couple of years on from its launch, the 508's interior is one of the most impressive on the market, regardless of price point. It's much the same in the Hybrid variant: a small steering wheel, high dashboard and sculpted seats all feature along with a series of styling choices that appear to put form just ahead of function.

It's a world away from the largely unimaginative efforts in its Skoda and Volkswagen rival, feeling more akin in the style stakes to those from BMW and Mercedes. Build quality is good, if not quite as impressive as in German and Japanese rivals, while the bulk of materials used are miles away from Peugeot plastics of old. The French brand has taken steps to improve its place in the market and that upward mobility is clearest on the inside of its most recent cars.

Sat in the driver's seat, the first thing you'll notice is the small, squared-off steering wheel and the 12.5-inch 'i-Cockpit' system it sits below, rather than in front of. It makes the low seating position feel even lower – great if you're the sort of driver who prefers such a position, but a slight issue if you need to raise the seat and wheel.

A large central touchscreen sits angled towards the driver at the top of a high centre console, measuring in at 10 inches on all hybrid models (non-hybrid Active cars get an eight-inch screen instead). On higher-spec models, there's plenty of exotic-looking wood or carbon trim, while blue ambient lighting on GT Line cars and above extends to the doors and dash for a particularly high-end look.

The 508 isn't lacking in equipment. Allure cars get the aforementioned i-Cockpit system and 10-inch infotainment screen, plus keyless go, power-folding mirrors, front and rear parking sensors and a reversing camera. There's a choice of split leatherette/cloth upholstery inside and diamond-cut 17-inch alloys on the outside.

GT Line adds some more goodies, including plusher detailing and more intricate interior trim, as well as a wireless phone charger, full LED headlights front and rear, plus an auto-dimming rear-view mirror. Top -spec GT cars get even more kit on top of this, including active suspension, power-folding memory mirrors, an automatic tailgate and an upgraded stereo system by Focal. 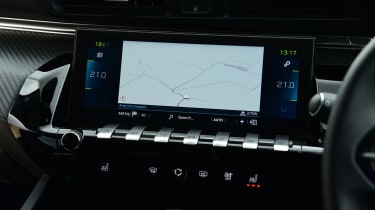 The focal point of the 508's high-tech aspirations is its infotainment system. Generally, it works well across its two screens, but the central 10-inch monitor isn't quite responsive enough to your inputs. Thankfully, a bank of piano-key buttons along its bottom edge makes hopping to different screens much easier. One of these buttons can be used to display the hybrid system's data, including energy usage and flow, along with driving-mode selection.

The smaller digital screen that's designed to sit above the deliberately small steering wheel is graphically interesting and generally easy to read, but if you favour a taller driving position, this can still be obscured by the top edge of the wheel. It's a small complaint, but one that may well be a deal-breaker for some.