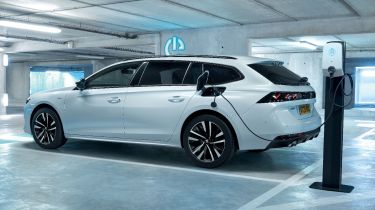 The Peugeot 508 is one of the cars at the forefront of the French brand’s push upmarket and towards electrification – intended as a rival for executive models like the BMW 3 Series and Mercedes C-Class.

The 508 was initially available with a range of conventional petrol and diesel engines and its maker has now added a plug-in hybrid to both the 'Fastback' hatchback and this 'SW' estate range. The latter is the more practical model, gaining space without sacrificing any of its cool – this is one of the best-looking cars on sale in our opinion. Key rivals include the estate versions of the aforementioned BMW and Mercedes, as well as the larger Volkswagen Passat GTE and Skoda Superb iV Estates.

The Peugeot is great inside, as you’d expect – the company’s modernist interior design is unlike anything else around and the materials and build quality on show are impressive, if not quite up to the standard of BMW and Mercedes.

Standard equipment is good and there’s an up-to-date infotainment system that operates across two screens – one on the dashboard that varies in size depending on trim level and another behind (or rather, just above) the tiny steering wheel. Once you’re used to its unconventional layout, the 508’s interior is a comfortable and relaxing place to be.

In fact, it’s things like this that have dramatically improved Peugeot’s reputation in recent years; the brand finished eighth overall in the 2020 Driver Power owner satisfaction survey, out of a total of 30 manufacturers. The 508 was perhaps too new to feature, but the closely related 3008 SUV finished second overall in the top 75 model rundown.

Power for the 508 SW Hybrid comes from a 1.6-litre petrol engine paired with an electric motor; together they produce 222bhp and can push the estate from 0-62mph in 8.3 seconds. Performance is stronger from some non-hybrids in the range, though; there’s an additional 300kg for the Hybrid to carry around.

It’s enjoyable to drive nonetheless; it rides well, has lots of grip through corners and is predictable and confidence-inspiring. It’s not the last word in sportiness, but that’s not exactly what the 508 is all about. It’s a great long-distance car that can hold its own on more demanding roads, all the while remaining easy enough to thread through town.

As with many plug-in hybrid models on the market, the system can be configured to prioritise efficiency or performance, or can be instructed to hold its electric power until needed – perfect for longer journeys that end with some lower-speed city driving. The system can also be set to shuffle between petrol and electric power automatically – just as the system sees fit.

Peugeot claims an electric range of 33 to 39 miles on a full charge. A 3.7kW on-board charger is fitted as standard, while a 7.4kW one can be fitted as an option; the car’s 11.8kWh battery should charge in around three and a half hours with the former or just under one hour 50 minutes with the latter, by our calculations.

But the biggest wins will come for company-car drivers, who can save a fortune on Benefit-in-Kind (BiK) tax. In this regard, the 508 SW Hybrid will cost thousands less per year to tax, when compared with one of the normal petrol or diesel models. Be careful, though; top-spec GT models that cost more than £40,000 new, will command the higher-level road tax (VED) – adding £325 to your annual bill for the first five years.

The 508 SW is a car that’s hard to recommend over its premium rivals – not because it’s much worse to drive or live with, but because its lack of a truly desirable badge means its residual values will always trail those of the likes of BMW, Audi and Mercedes. The 508 is undoubtedly handsome and capable, but the equivalent BMW 3 Series, the 330e Touring, will always be the better choice.