This list is filled with models that set the tone for the future electrified output of most major manufacturers, with some launching all-new line-ups to herald new directions, such as the ID. moniker from Volkswagen, and others bringing new electric life to familiar models, such as the Peugeot 208 and Fiat 500.

Range, performance and charging times also take another step forward in 2020, with many vehicles here offering a combination that should make electric cars feasible for most drivers.

Read on to see our list of the most important electric cars of 2020. 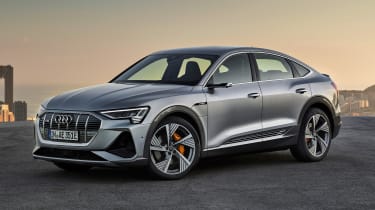 Hot on the heels of the Audi e-tron, the Audi e-tron Sportback arrived earlier in 2020 sporting a more dynamic coupe-like body. It’s based on the same mechanical underpinnings as the standard e-tron, with two variants; a 50 quattro with a 71kWh battery capable of 216 miles of range, and a 55 quattro version with a 95kWh unit and 278 miles of range. The latter of those will harbour more power – 402bhp, to be exact – and will be capable of 0-62mph in 5.7 seconds. Yet that's not even the most powerful variant of the e-tron Sportback, since a new 'S' performance model is also due; this will be the brand's first electric performance car, packing 496bhp and a 0-62mph time of 4.5 seconds.

Read our review of the Audi e-tron Sportback 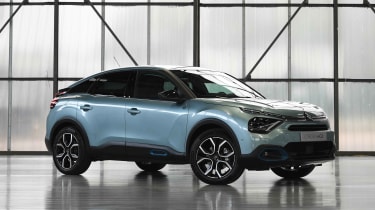 Citroen has brought the C4 family hatchback back, this time with option of electric power. It sits on brand-new underpinnings specifically designed to accommodate 50kWh battery, in order to deliver a 217-mile range. It's a rival for the Volkswagen ID.3 hatchback, using the same platform as the Peugeot e-208 and Vauxhall Corsa-e.

Read more about the Citroen e-C4

The new Fiat 500 is set to go all-electric in 2020: petrol versions of the previous-generation model will continue to be sold, but from hereon in if you want a new 500, it'll be electric. Orders are already open for the all-electric 500, which stays much the same size as the existing 500 but takes on slightly edgier, more modern styling. A 117bhp electric motor drives the front wheels, and it'll be offered with three driving modes and variable brake-regeneration that will include a one-pedal driving mode for around town. At launch, it'll only be offered as a convertible and in a high-spec trim, prices for which will start from under £30,000 after the UK government grant. It'll compete with likes of the Honda e and MINI Electric.

Read more about the electric Fiat 500 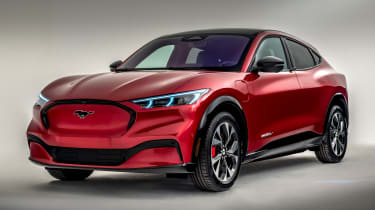 Ford has somewhat hijacked its famous muscle car's name for the launch of its first electric vehicle: the Mustang Mach-E. Fortunately, it's promising the performance to justify the move, with the most powerful version set to make 459bhp. Two battery sizes – 75 and 99kWh – will be offered alongside various power outputs, although the longest-range model is targeting a figure of 370 miles. UK prices start at just over £40,000: order books are open now, but sales won't begin until early 2021 due to factory shutdowns caused by the coronavirus pandemic.

The Honda e takes a different approach to the electric-car recipe: the company has gone to great lengths to make it as light and as agile as possible in order to make it fun to drive. This means the battery – a 35.5kWh unit – is relatively small, and the 136-mile claimed range makes the e best suited to urban buyers. The starting price of £26,660 isn't cheap, but the kit on board earned the electric city car our 'best car technology' prize at the 2020 DrivingElectric Awards. 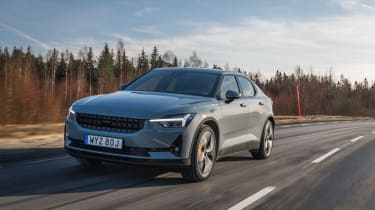 Polestar – formerly the performance tuning arm of Volvo – is now a standalone brand with a focus on electrified models. Its first car, the Polestar 1, has already set the tone with its 592bhp plug-in hybrid powertrain, and 2020 brings the company’s first pure-electric car – the Polestar 2. It's a four-door coupe to rival the Tesla Model 3 and gets a driving range of 292 miles from a 78kWh battery, with prices starting from £46,900. It's got some performance guts, too, as the dual electric motors deliver 402bhp and a 0-62mph time of under five seconds.

Read our first drive of the Polestar 2

When revealed in 2019, the Peugeot e-208 caught the attention of the motoring world with its distinctive design. It's also one of the first household-name models to offer a pure-electric option alongside conventional petrol and diesel motors, and has been joined by the Vauxhall Corsa-e that shares the Peugeot's platform and motor. The e-208 offers 211 miles of range from a 50kWh battery, with a 134bhp electric motor that delivers usefully punchy performance. It's compatible with 100kW rapid charging too, with an 80% top-up expected to take just half an hour. 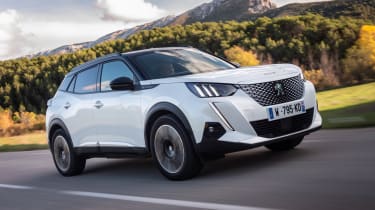 Following the e-208 is its bigger brother, the Peugeot e-2008 SUV. Closely related to the DS 3 Crossback E-TENSE, the e-2008 uses the same 50kWh battery as the e-208, returning slightly less range – 193 miles – owing to its larger profile. Capability for 100kW rapid-charging technology also features, meaning recharging times are up there with the best in the class. The car is ready to compete with the likes of the Hyundai Kona Electric and Kia e-Niro. 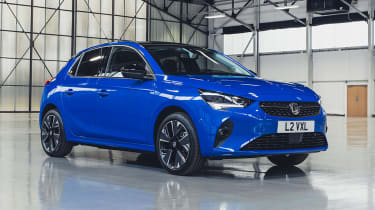 Order books for the Vauxhall Corsa-e have already opened and first deliveries will take place later in 2020. Including the UK’s plug-in car grant, prices start from £27,665, which may seem a tad steep, especially given that the 50kWh battery only delivers 205 miles of range; a fraction less than the Peugeot e-208 and substantially less than the Renault ZOE.

However, monthly finance of £270 could put the Corsa-e on plenty of buyers’ radars, and such a big-name model promises to persuade a lot of new buyers into an electric car for the first time. Not only that, but company-car tax makes electric cars virtually free for employees, and being such a well established fleet choice the electric Corsa could also be a big contender for many large fleets.

Read our review of the Vauxhall Corsa-e 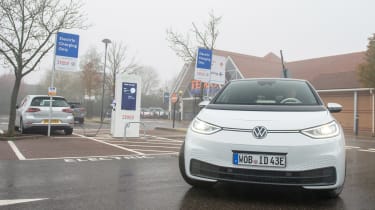 With 15,000 pre-orders within a week of reservations opening, the new Volkswagen ID.3 hatchback certainly hit the ground running. Three trim levels will be available, although UK customers will be restricted to just one initially: the mid-range ID.3 1st Plus. It gets a 58kWh battery and 261 miles of range, as well as 2,000kWh of free rapid-charging on the IONITY network.

A 45kWh and a 77kWh model will join the range after launch, offering a range of 205 and 342 miles respectively. Prices haven’t been announced, but expect the ID.3 1st to cost from around £26,000 after the government grant has been deducted. Orders for the UK opened in July 2020.

Read our review of the Volkswagen ID.3