A mid-life facelift has given then Hyundai Ioniq Electric more range, more power and a new infotainment screen 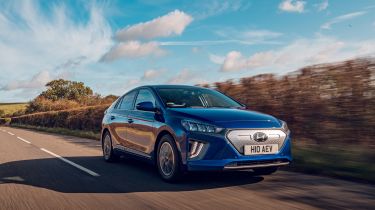 Given how fast the electric-car market is evolving, you'd have been forgiven for forgetting the Hyundai Ioniq Electric exists. Launched back in 2016, the unremarkable family hatchback quietly slipped into afterthought territory as newer, more capable cars captured our attention. A facelift was required and was duly delivered: enter the improved Ioniq Electric, complete with more range, more power and more technology than before.

On a full charge, the Ioniq Electric now offers 193 miles of range, up from the 174 of the old car. That's not a huge jump on paper, but you have to account for the fact that the old car was tested using the now-defunct NEDC procedure, which was a lot more generous than the more realistic WLTP system.

You also need to bear in mind that the Ioniq Electric delivers its range from a 38.3kWh battery, meaning its theoretical efficiency of over five miles per kWh is right up there with our Kia e-Niro long-term test car. So how has Hyundai pulled this off? Well, various changes to the exterior make the Ioniq Electric more aerodynamic: a new grille, headlights (now LEDs, as are the tail-lights) and 16-inch alloy wheels all help, while new tyres reduce rolling resistance and save precious energy.

Pleasingly, the upgrades have had the desired effect. We first drove the Ioniq Electric in warm conditions in the Netherlands, where it returned 5.2kWh on a route that included a significant number of miles on the motorway; in theory, the least efficient type of road for an electric vehicle.

We've since driven the Ioniq Electric in the UK, albeit in much colder temperatures that noticeably reduce the range of all battery-electric cars. But even faced with 2-5°C and a mix of city roads and motorways, the Ioniq still managed an impressive four miles per kWh and a maximum range of 166 miles on a full charge. Given the car's excellent efficiency, we'd expect wallbox charging costs of well under 3p per mile. 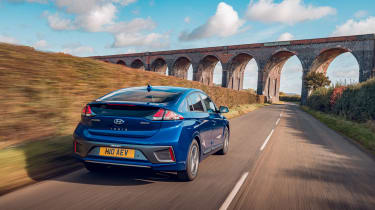 The facelifted Ioniq’s single electric motor produces 134bhp, with 0-62mph achieved in 9.7 seconds en route to a top speed of 96mph. Behind the wheel, the Ioniq feels like a typical electric car, with hefty acceleration in the 0-30mph range but less urgency after that. Body lean is well suppressed in corners, and while there's little in the way of steering feel, there's a pleasing fluidity to it through corners nonetheless.

The car's point-and-squirt ability is good fun around town too, and there’s enough performance to overtake with ease at motorway speeds. It’s here that the Ioniq Electric’s new, four-stage regenerative braking system performs best, allowing you to scrub speed without using the brakes. Hyundai says the highest setting will provide ‘one-pedal’ driving, similar to the Nissan Leaf’s e-Pedal, but in practice it’s not quite strong enough to bring the car to a stop at junctions or roundabouts.

Inside, the interior was overhauled: a 10.25-inch touchscreen – compatible with Apple CarPlay and Android Auto – is now standard, sitting higher than before to make it easier to read. The instrument cluster behind the wheel is also crystal-clear, and while the touch-sensitive buttons on the centre console can be tricky to use while driving, the infotainment system itself is one of the best we've come across.

Hyundai’s BlueLink app was thrown in, too; this allows you to monitor charging remotely: you can expect a 50kW, Type 2 public charger to deliver a 0-80% charge in under an hour, while a home wallbox will perform a full top-up in six hours and five minutes.

So did the updates put the Ioniq Electric back at the cutting edge? No, but as an efficient, spacious, comfortable and well equipped car, it does still nail the basics. It poses a serious threat to the Nissan Leaf, and those who can’t afford a Tesla Model 3 should seriously consider it, too.

For a more detailed look at the Hyundai Ioniq Electric, read on for the rest of our in-depth review...