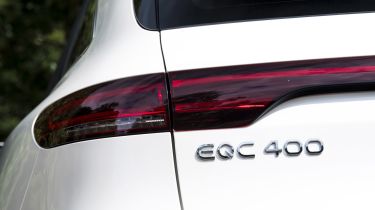 Euro NCAP awarded the EQC a five-star official safety rating and Mercedes is confident enough in the car’s safety standards to have released videos and details from its own crash tests, too. Unusually, blind-spot warning is standard on the EQC, but it’s a shame that adaptive cruise control, lane-keeping assistance and autonomous traffic driving are part of an optional pack.

It’s very hard to comment on the reliability of the EQC at this point. It shares much of its architecture with the Mercedes GLC, but its powertrain is an unknown quantity at the moment and company executive aren’t willing to estimate how many cycles (where the battery is charged and discharged) the 80kWh lithium-ion battery pack will do before any significant loss of performance.

But the eight-year/160,000-kilometre warranty includes a guarantee that Mercedes will replace or refurbish the car’s batteries if they drop below 70% of their as-new performance within that period.

The Mercedes EQC comes with a full array of airbags and parking sensors, as well as a reversing camera, blind-spot assistance, autonomous emergency city braking, lane-departure warning and some impressive LED headlights as standard.

However, it’s disappointing that you have to pay £1,695 to get a safety pack that brings adaptive cruise control, autonomous traffic jam driving and lane-keeping assist (where the car actively steers to keep you in lane rather than sounding a warning, which is does as standard), which all add up to deliver a semi-autonomous drive mode best reserved for dual carriageways.