The Lexus RX 450h makes the most sense as a company car, although plug-in hybrids offer lower costs 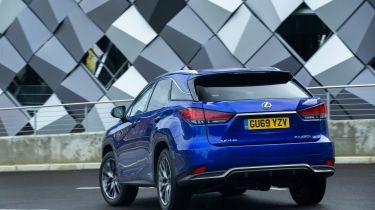 There's no Government incentive when buying a hybrid like the Lexus RX 450h, and the entry-level five-seat model costs over £50,000. You’ll pay around £2,000 more for the seven-seat 450h L version, and the top-spec 450h Takumi costs nearly £62,000. That's not cheap, but considering the specification, it looks reasonable value compared to luxury SUV rivals.

The Lexus also benefits from advantageous Benefit-in-Kind (BiK) rates compared to non-hybrid rivals, which, given the relatively high list prices, could mean significant savings for company-car users. However, plug-in hybrids like the Volvo XC90 T8 Twin Engine and BMW X5 xDrive45e are usefully cheaper for company car tax thanks to their much lower emissions, and fuel costs could also be drastically less if you can charge a PHEV regularly. Meanwhile, those ready to take the plunge on an electric car will pay nothing in company-car tax in 2020.

You’ll find the Lexus 450h quite pricey to insure, as it falls into group ratings 41 and 42 depending on spec. However, it’s not out of step with rivals, which are all in the same ballpark.

The three-year/60,000-mile warranty that Lexus provides is unexceptional when others like BMW provide unlimited-mileage cover over three years, although the Japanese company’s gold-plated reputation for reliability should provide ample reassurance in its own right.

The Lexus warranty extends to five years for the hybrid battery and other components, but there’s a 60,000-mile limit on those items, too.

Our experts reckon Lexus RX 450h depreciation over three years and 36,000 miles will see residual values fall to between 56% and 50% of the original purchase price. The seven-seater version is at the bottom end of that range and the less expensive specifications at the top.