Sheer size can make the RX 450h a handful on the road, but there’s loads of interior space 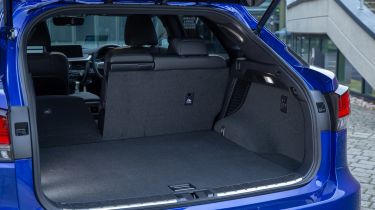 The five-seater is a great way to travel even with a body on every seat. The extra row in the seven-seater is cramped though, and the boot space lags behind rivals by some margin.

Make no mistake, five people can travel in comfort in the spacious interior of the RX 450h. There’s loads of knee, shoulder and headroom room up front, with those multifunction powered seats offering plenty of adjustment.

The back seats – or the second row in the seven-seater – are impressive, too, especially as the middle occupant has no bulky transmission tunnel forcing their feet into the footwells of those seated either side.

In fact, the floor is completely flat in the rear passenger compartment, and with an option to recline the limousine-style rear seats, there are likely to be few complaints.

There’s plenty of storage inside, too, with big door bins that'll swallow a water bottle with ease, adjustable cup-holders in the centre console and a decent glovebox.

There’s less good news for those travelling in the back of the seven-seater, as the third row of seats is cramped and really only suitable for children over anything more than a short distance. Access to the back row is pretty good, though, thanks to wide-opening doors.

In spite of the car's size, RX 450h luggage capacity is disappointing compared to non-hybrid rivals. The batteries are stored under the boot floor, and boot space is compromised as a result. The five-seater has 453 litres, which rises to 924 litres when you fold the rear seats, but they don’t lie flat on the floor, so there’s a hump to load over, too.

Choose the 450h L and luggage space goes up to 495 litres when the third row is folded away, and 966 litres when the middle row is stashed, too. That’s still feeble compared to the Volvo XC90, which offers 1,868 litres of boot volume with all the seats folded, and 451 litres with all seven seats in use.

On the positive side, the Lexus has a 60:40 split-folding second-row seats, and they operate electronically using either a button in the boot or in the interior.