A range of bodystyles and a one-tonne payload count in the LDV EV80's favour, but it's best suited to urban use and build quality isn't the best 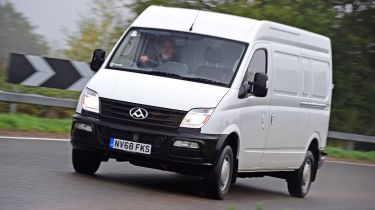 Several companies have large electric vans in development or on the way – the Mercedes eSprinter and Volkswagen e-Crafter among them. But if you want to buy right now, your choices are limited to the Renault Master Z.E. and this, the LDV EV80.

Starting at under £55,000 after the government's plug-in van grant has been applied, the EV80 looks quite expensive, even if it does undercut the Renault by a few thousand pounds. But that's the price that needs to be paid, for the moment anyway, if you need both zero emissions and a larger cargo capacity than the likes of the Nissan e-NV200 or Renault Kangoo Z.E. can offer. And if the vehicle is used solely for business purposes, then company van tax is zero.

As well as being cheaper than the Renault, the LDV has a slightly longer driving range and is more versatile, being offered in a choice of panel van, chassis cab, Luton van and minibus bodies to suit customers' requirements. The Master Z.E. is only available as a panel van.

On the downside, the EV80 is based on a very dated platform: the old LDV Maxus diesel van that was first introduced in 2004. That model was discontinued and then brought back to the UK with a newer diesel engine when the LDV brand was taken over by Chinese group SAIC (which also owns MG) and the EV80 simply swaps out that diesel powertrain for an electric motor and batteries. At least there's a five-year/125,000-mile warranty to allay any durability concerns.

There's no loss of cargo volume compared to the diesel-engined V80 variant, as the battery is placed under the load area. Buyers of the panel-van version can choose from mid- and high-roof layouts, for cargo volumes and payloads of 10.4 cubic metres/950kg and 11.6 cubic metres/910kg respectively. There are multiple lashing eyes in the floor, the rear doors open out to 270 degrees and there's a single nearside sliding door too.

The motor makes 123bhp and the lithium-ion battery pack has a capacity of 56kWh. Claimed driving range is 119 miles, but a full payload and colder temperatures can eat into that figure significantly. With sprightly acceleration from rest to about 40mph and no gears to worry about, the EV80 copes well with congested city and suburban routes, but is less at home on the motorway, as top speed is restricted to just 62mph. Road noise is significant at this speed and it also cuts the battery range dramatically. 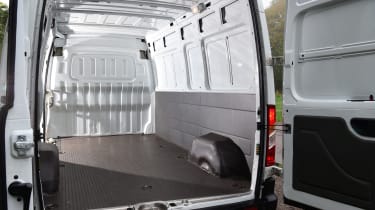 It takes a few seconds to spring into life when you hit the start button, with a green 'ready' icon on the dashboard letting you know when the electric motor is good to go. The electronic parking brake (in place of the manual brake in the diesel van) is a useful addition; it engages and disengages automatically when you put the van in 'park', which is a boon for delivery drivers on multi-drop, stop-start routes.

There isn't a huge degree of energy recovery available due to the van's weight, but on the plus side neither the heating or air-conditioning appears to have a negative effect on the available range. Ride quality is on the firm side, but not far off what you'll experience in rivals.

A CCS socket takes care of charging; it's located on the driver's side, where the fuel filler would be in the diesel van. Maximum charging speed is 30kW, which should give you a full top-up in about 90 minutes, while seven hours is sufficient to replenish from a 7kW wallbox. An eight-bar gauge on the dashboard tells you how much energy is remaining as you drive around, but it's much less sophisticated than the multifaceted energy-usage displays found in many electric cars.

In the driver's cabin, quality is some way off that found in more mainstream rivals, with some very scratchy and cheap-feeling plastics betraying the advanced age of the underlying LDV platform. The drive selector and parking brake lever are clearly drawn from a more recent source, however, but this only serves to emphasise the poor quality of the other surfaces.

One element that is up to date is the 10-inch touchscreen infotainment system, which incorporates Apple CarPlay smartphone integration. This makes the rest of the readouts – including the dated-looking centrally mounted dials – easier to forgive. The cabin is also spacious, with plenty of room for three and good visibility out of the windows and in the wide-angle mirrors. Parking sensors are standard and a reversing camera can be added as an option.

Overall, despite its shortcomings, the LDV EV80 does a good job of fulfilling the urban, zero-emissions delivery-van brief, for less money than its only true competitor on the market right now. But with a flurry of new arrivals in the sector expected over the next 18 months or so, it won't have the market practically to itself for very long, and may soon be outclassed.