The new 10.25-inch touchscreen found in the latest Hyundai Ioniq Electric is one of the best we've used 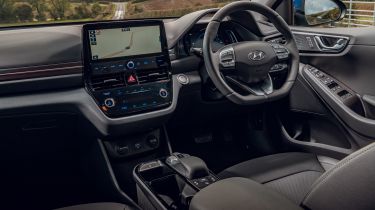 In terms of design, the facelifted version of the Ioniq Electric isn’t much different inside from the one that came before it, although drivers will notice that there’s a new 10.25-inch colour touchscreen in the centre of the dashboard. It’s an improvement on the old eight-inch unit, offering the same Apple CarPlay and Android Auto smartphone connectivity as before.

Beneath the infotainment screen, the centre console has seen the majority of its buttons replaced with a touch sensitive panel controlling the screen menus and climate control. These look reasonably stylish, but can be tricky to use while driving.

In between the front seats, there are two panels of buttons: one for selecting drive and reverse, and another for features like parking sensors and heated seat functionality. There are also two reasonably sized storage areas, one of which can be found under the central armrest.

There are two trims available on the Ioniq Electric: the entry-level Premium spec and the top-of-the-range Premium SE level. Premium cars come with a wireless smartphone charging pad, a heated steering wheel and front seats, plus power-adjustable lumbar support in the driver’s seat.

Also included is an auto-dimming rear-view mirror, a rear-view monitor, rear parking sensors, keyless entry, a stop-start button and adaptive cruise control that can bring the car to a complete halt before setting off again. Safety features include autonomous emergency braking (AEB) and driver drowsiness monitoring.

Meanwhile, the Premium SE adds upmarket touches such as chrome doorhandles and privacy glass. The front leather seats are heated as well as ventilated (and the driver’s seat has a memory function), while the rear, outermost seats are heated.

Automatic windscreen wipers are included, too, while additional safety features include blind-spot monitoring, lane-following assistance and rear cross-traffic alert. Premium SE buyers also get the choice of Shale Grey or Electric Shadow exterior paint, while a sunroof is an optional extra. 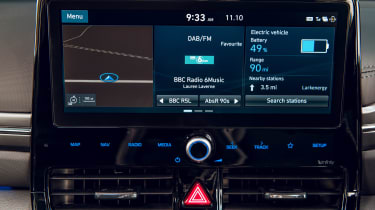 The resolution of the infotainment screen is very sharp and the menus are easy to get used to. Happily, Hyundai has made sure that all of the options and sub-menus occupy a large surface area on the screen, making it better to use on the move than some systems developed by other manufacturers. There's no haptic feedback nonsense (such as that featured on the Audi e-tron) either.

There are some clever features too: the 'ECO driving' menu lets you review the electrical efficiency achieved on previous journeys, while the 'energy consumption' section provides a real-time display show which of the Ioniq's systems are drawing power at any given moment. For example, this means you can accurately see the effect of turning on the seat heaters on a cold day, and the subsequent effect on range. It's very good indeed; perhaps second only to BMW's infotainment set-up.

The Ioniq Electric is compatible with Hyundai’s BlueLink smartphone app, which can be used to adjust the climate control, as well as unlock the doors and monitor charging remotely. You can also use the app to locate the Ioniq (in a busy car park, for example), and it will also notify drivers when any maintenance is required. Apple CarPlay and Android Auto smartphone connectivity is included as standard.