Will an electric car work in the winter?

Believe it or not, the UK has a relatively mild climate. Its warm-ish summers and cool winters are nowhere near as extreme as what you get in some of North America and much of Eastern Europe.

However, sub-zero temperatures – especially at night – are common in the UK during January and February, with the possibility of snow during particularly cold snaps. Unfamiliar conditions can prove tricky for motorists as the local authorities desperately try to keep traffic moving.

Freezing temperatures not only bring with them ice and snow, but they also affect the way cars drive and perform. Electric cars in particular are impacted by the cold, but this doesn’t mean they can’t or don’t work in icy conditions. Norway, one of the biggest adopters of electric cars per capita, has much tougher winters than the UK. So if they can work in Norway, they’ll do just fine here.

How does winter affect an electric vehicle?

In simple terms, batteries rely on chemical reactions to give off electricity. The cold slows down these reactions, which in turn slows down the battery's performance. Lithium-ion batteries (the most common technology used in electric and hybrid vehicles) work when lithium ions move from the anode to the cathode in the battery – a process that creates electricity. Cold slows this process down and restricts battery performance.

For example, Renault says its latest ZOE Z.E.50 will do as much as 295 miles if you travel at a steady 31mph when the outside temperature is 20 degrees Celsius. Should the temperature drop to -15 degrees Celsius, then the very same car, travelling at the same speed, will do just 220 miles. Of course, the faster you go, the lower the range; in sub-zero temperatures, you can expect less than 100 miles of range in a ZOE Z.E.50 travelling at 80mph. 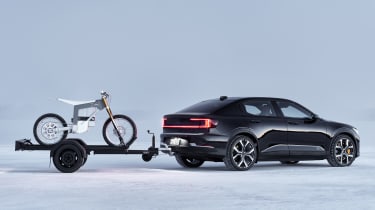 Should I worry when driving during the winter?

Apart from keeping an eye on the vehicle range, as well as the weather and road conditions, there isn’t much to worry about. Electric vehicles are in general heavier than petrol and diesel models.

This means that their slides may be harder to control, so it's even more important to drive slowly and carefully in bad conditions. This can, of course, be mitigated by investing in a good set of winter tyres for your car, and driving carefully to the conditions.