The Hyundai Ioniq Electric is far from the most practical family car, but it’s more than adequate in key areas 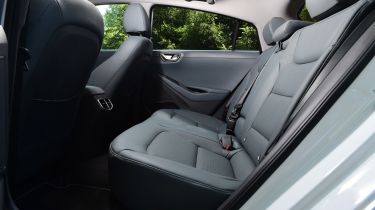 The mid-life facelift improved the Ioniq Electric in a number of ways, and as the proportions of the cae haven’t changed, it’s just as practical and as spacious as before.

The driver and front passenger will be very comfortable in the Ioniq Electric, with lots of interior space at the front. Headroom in the rear is decent, although six-foot adults may find that the sloping roofline gives them very little wiggle room. The fact that the battery is partially located under the seats also doesn’t help.

Kneeroom isn’t too bad, although the hard material lining the rear of the front seats might cause some discomfort to long-legged passengers. There's a good view out of the vehicle thanks to the generous proportions of the windows, and wide-opening doors make it easy to get in an out.

In terms of interior storage, the Ioniq Electric fares well: the front door bins are large (although those in the rear are smaller), and there are lots of spaces to store tablets, phones, wallets and the like. Cup holders are also provided for convenient access to drinks on the go. 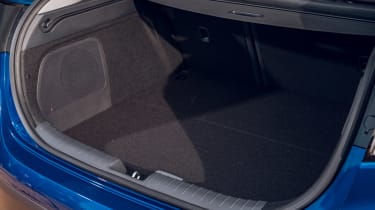 Despite the battery capacity rising from 28 to 38.3kWh in the latest Ioniq Electric, boot capacity hasn’t decreased: in fact it has gone up slightly, rising to 357 litres from 350. Luggage capacity with the seats down also increases by seven litres, rising to 1,417 litres in total.

It’s worth noting that the facelifted Ioniq Hybrid comes with 443 litres of boot space, while the Plug-In version actually has less space – 341 litres – than this battery-electric counterpart. A Nissan Leaf, meanwhile, has 435 litres at its disposal.

There’s just about enough space under the boot floor to store one the car’s charging cables, which is a marginally better solution than lugging around the large bag that Hyundai provides for its three-pin and Type 2 cables. Meanwhile, there’s a slight load lip on the tailgate, which could make loading heavier items into the boot a bit of a challenge. Potential buyers should be aware that no spare wheel is provided; instead, there’s a tyre repair kit in case of emergencies.