The plug-in hybrid DS 7 Crossback E-TENSE SUV offers up to 40 miles of electric range and plenty of luxurious touches, but it's quite expensive 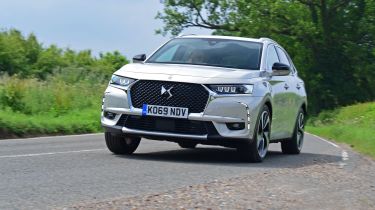 By 2025, every model that DS makes will either be an electric car – like the DS 3 Crossback E-TENSE – or a plug-in hybrid capable of at least 30 miles in electric-only mode. This DS 7 Crossback E-TENSE falls into the latter category, delivering up to 40 miles of range from its 13.2kWh battery.

Prices ranging from just under £48,000 to more than £56,000 make it a rival for upmarket German offerings like the Audi Q5, BMW X3 and Mercedes GLC hybrids, while the technology used in the DS 7 E-TENSE also appears in the Peugeot 3008, Citroen C5 Aircross and Vauxhall Grandland X hybrids.

A 1.6-litre turbocharged petrol engine develops 200bhp and two electric motors contribute 108bhp apiece, meaning the total system output amounts to 296bhp. This figure is deemed enough for DS to describe the SUV as a “high-performance hybrid” and as the 0-62mph time of 5.9 seconds suggests, the four-wheel-drive E-TENSE doesn’t hang around when launched off the line.

A less powerful 222bhp version with front-wheel drive only is set to join the range in November 2020 but we haven't driven it yet, so for the time being this review concentrates on the four-wheel-drive model of the car.

As is the case with the rest of the DS 7 line-up, the E-TENSE falls short in some areas. It’s not meant to be a sporty vehicle, so its lack of sharpness in corners and on fast B-roads isn’t really a surprise. More of a letdown is the ride quality, which uses intelligent adaptive dampers that prepare for bumps and potholes in advance by using cameras to scan the road ahead.

With the exception of during motorway driving, the system never quite delivers the comfort promised by DS, proving too wallowy in Comfort mode or too fidgety in Sport mode. The eight-speed automatic gearbox is another frustration: it’s slow to change down, relying on the electric motors to make up for its sluggishness with the instant acceleration they provide. 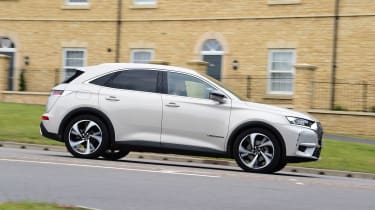 With enough charge in the battery, the DS 7's four-wheel-drive mode allows it to drive off-road in silence, save for the occasional input from the engine when extra torque is required. The on-road tyres limit the amount of traction (this is no Range Rover, after all), but the ability to tackle tougher terrain is a boost nonetheless.

In truth, the DS 7 Crossback E-TENSE is at its happiest in all-electric, zero-emissions mode, with a smooth, refined drive: it’ll do speeds of up to 83mph without assistance from the engine. A full charge from a 7kW home wallbox takes less than two hours and even if you only have a three-pin socket, the eight-hour recharge time will be enough to cover most commutes when the car is plugged in overnight.

Hybrid mode also has its benefits, with the system working out the most efficient mix of the available electric and petrol power. Officially the SUV returns 166-235mpg, although achieving this figure in the real world relies on regular charging via the Type 2 socket.

CO2 emissions of 33-37g/km put the E-TENSE in the lowest Benefit-in-Kind company-car tax category and qualify for London Congestion Charge exemption, too – albeit only until October 2021.

There's no doubt that the E-TENSE is the pick of the DS 7 Crossback line-up, but whether you should choose it over its slicker, better-executed German rivals, which are available for the same or similar money, is another matter entirely. For a more detailed look at the DS 7 Crossback E-TENSE, read on for the rest of our in-depth review. 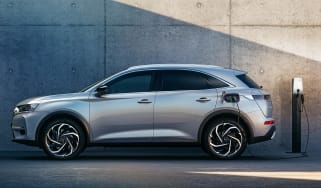