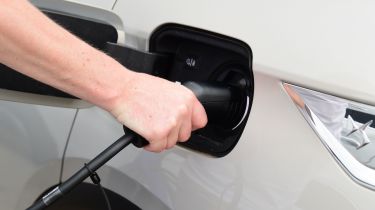 Like other large and luxurious plug-in hybrid SUVs, the DS 7 Crossback E-TENSE can at first seem like a bit of a contradiction in terms with its powerful petrol engine, relatively hefty weight and load-to-the-gunwales equipment list ranged against the zero-emissions efficiency efforts of its electric motors.

On the plus side, its electric range is pretty good for the class, the battery tops up quickly and the car does its utmost to stay in zero-emissions mode during everyday driving, so making the most of its electric running potential isn't too much of a chore.

The DS 7 Crossback plug-in hybrid promises to travel up to 40 miles on electric power alone, which is pretty competitive with SUV rivals. Its drivetrain isn't as eager to switch to petrol power as some other plug-in hybrids', either, so you should be able to do quite a bit of your everyday motoring without using a drop of petrol.

Make the most of that electric range and you just might be able to get in sight of the car's official fuel-economy figures, which hover around the 200mpg mark. Experience has shown that hitting these sorts of numbers in real-world driving is tricky, but as long as you're not flooring it everywhere, the E-TENSE should prove to be more efficient than its purely petrol equivalent.

And while the savings at the petrol pump may not be enormous, the financial benefit for company-car drivers compared to a diesel or petrol DS 7 is significant, thanks to the plug-in's ultra-low Benefit-in-Kind (BiK) tax band.

Official CO2 emissions are where plug-in hybrids really shine and the DS 7 is no exception, putting out between 30 and 39g/km depending on what wheel size you choose. That's well below the 75g/km threshold to qualify for London Congestion Charge exemption until October 2021 and, when combined with the aforementioned electric range, gives you the ultra-low company-car tax rating that's one of this car's biggest attractions.

Given the decent electric range on offer, the DS 7's charge time of just an hour and 45 minutes from a 7kW home wallbox is very good. As with most plug-in hybrids, the Crossback doesn't have rapid charging capability, so while you can plug it in to a faster public charger at a motorway service area or supermarket car park, it won't top up any quicker than it would on your driveway.