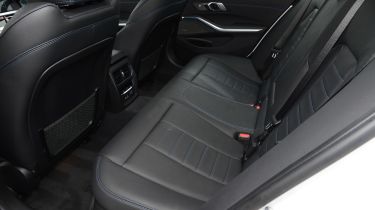 As a compact executive saloon, the 3 Series has never really been about outright passenger or luggage carrying ability, but comfortable seating for four and a decent boot are still important to buyers in this sector and the 330e does reasonably well on both counts.

Previous BMW 3 Series generations were known for being a bit tight in the back seats, especially compared to key rivals like the Audi A4 and Mercedes C-Class.

The company has improved things with this latest generation, extending the wheelbase by 41mm in order to boost legroom in the back. You'll now sit a couple of six-footers fairly comfortably even behind a tall driver, and BMW states you'll fit three child seats side-by-side in the back (although only the outer two have ISOFIX mounting points). 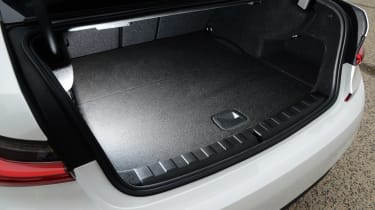 This is one area where the 330e has to give best to its 330i petrol and 320d diesel stablemates. Its boot capacity is 375 litres – 105 down on the other versions in range – due to the need to accommodate the hybrid system's battery.

The remaining boot space is good enough to easily cope with the fairly light duties expected of an executive saloon, but it's quite a shallow boot, so if you do need to occasionally squeeze luggage in for a family of four, you might struggle. There's no cable storage, either, although the cable bag is fairly small and fits into a side cubby built into the boot, provided you're patient enough to pack the cables carefully.

For those who need more boot space, BMW has put the 330e hybrid drivetrain into the Touring estate for 2020.

The 330e has a relatively low towing limit of 750kg, compared to 1,600-1,800kg for the rest of the 3 Series range. Find out more about towing with a hybrid or electric car here.