An official electric range of up to 37 miles is best in the class, so the BMW promises to be as efficient as it gets for plug-in executive saloon 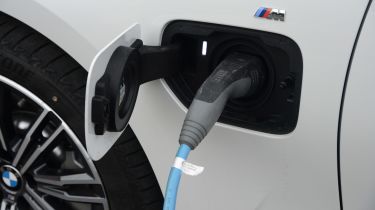 As with all plug-in hybrids (PHEVs), maximising the BMW 330e's efficiency means charging it up fully before every journey.

It's at its most efficient on short to medium-distance trips around town and the suburbs. If you routinely do a lot of long-distance motorway runs, a diesel could be a better bet for fuel economy.

CO2 emissions are rated at 37g/km officially, and electric range has been improved from 25 miles in the previous model (which went off sale in 2018) to 37 miles in this version. It's unlikely you'll hit that mark on every single journey, but bank on at least 30 miles for sure – enough to cover many people's daily commutes and errands.

If you spend a lot of time around town, you could quite easily eke the real-world electric range up to 35 miles or so, in our experience, but motorway miles or cold weather (which impact the range on any electric car) will see that drop to 30 miles or less.

With the petrol engine running, we found the 330e returns economy of around 40-45mpg in varied use, including a lot of motorway miles. That's good for a petrol car with this level of performance and the ability to deliver fuel-free commuting over shorter journeys – and better than a Volvo S60 T8 will return.

Even so, a BMW 320d diesel will likely do 50mpg and over in similar use, so if you routinely cover big motorway miles, then do bear in mind that a diesel will be more economical. This is where the diesel plug-in hybrid Mercedes C-Class could also be a great compromise if you want electric running and diesel economy.

Annoyingly, a Type 2 cable that you'll need to access public charging stations doesn't come as standard – you have to pay extra.