Keen drivers will be right at home in the BMW 330e, especially when they put it into Sport mode for extra power 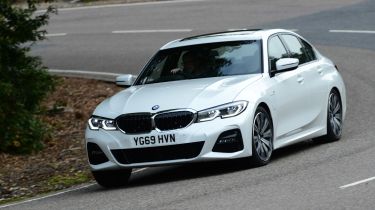 BMW has made the transition to hybrid and electric cars with its reputation for building 'ultimate driving machines' intact. Both the electric i3 and plug-in hybrid i8 are superb to drive, and the same can be said for the plug-in hybrid executive saloons like the 530e and this 330e.

A swift 5.9-second 0-62mph time and a 143mph top speed are the bare performance figures for the 330e. For maximum performance, switching to Sport mode gives access to something called 'XtraBoost', which temporarily increases the available power from 249 to 288bhp.

Like all BMWs though, the 330e's driving experience is more about how it feels from behind the wheel than just the raw numbers. Especially with 'XtraBoost', it responds instantly to any prod of the accelerator pedal, with the electric motor working well to fill in any gaps in power delivery from the petrol engine.

Our one criticism is that the noise from the four-cylinder engine isn't great when you're 'pushing on' and the augmented artificial sound sent through the car's speakers isn't much better.

On the plus side, the 330e doesn't feel like it weighs 200kg more than a petrol or diesel 3 Series – the extra bulk is well disguised and it's as sweet handling as we've come to expect from this model over the years.

As standard, the 330e comes with special low-resistance tyres to further boost efficiency. They do this job well, but in the process offer a fraction less grip than the typical sports tyres fitted to executive-saloon models.