The BMW 330e plug-in hybrid will be a very cheap car to run in most cases, especially for company-car users 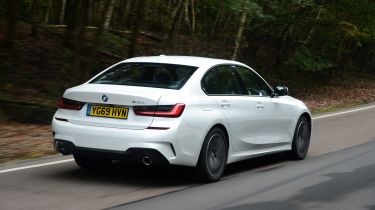 BMW has always been good at making luxurious cars that are cheap to run, and the latest 330e is a typical embodiment of this philosophy. Its low CO2 emissions reduce company-car tax bills compared to running a diesel, and it can be very frugal in day-to-day motoring if you make the most of its 40+-mile range.

The BMW 330e falls into insurance group 33, regardless of trim level. That's slightly more than the 320d diesel model (which is in group 29) as well as the equivalent Mercedes plug-in hybrid, the C 300 de (also in group 29).

The BMW 330e gets the same three-year/unlimited-mileage warranty as any BMW sold new in the UK, which is comparable to those offered by rivals Mercedes, Audi and Volvo (although the latter two imposes a 60,000-mile limit on its cover).

As a plug-in hybrid, the 330e is classed as an 'alternatively fuelled vehicle' by the government and so gets a £10 discount on the standard annual road-tax rate of £150, down to £140.

However, it only takes a few optional extras ticked on the order form to nudge the 330e's price above the £40,000 threshold for paying the £325 annual luxury-car surcharge. If you do so, you'll be paying £465 annually for the five years road tax is due, reverting to £150 a year after that.