It’s easy to love the Audi A8 TFSI e's effortless performance and sublime refinement, but there are some small niggles 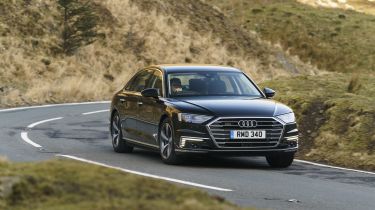 The way the Audi A8 hybrid drives will be a secondary consideration to its refinement and comfort for many, but there’s still a market for driver-owners who like a larger vehicle. The good news is that the A8 doesn’t disappoint, and it has lots of power, but it’s not exactly thrilling either.

It’s one of the most refined and comfortable cars Audi makes, but keen drivers should look towards the BMW 7 Series for a big saloon that’s relatively light on its feet. For the ultimate in comfort and refinement, the Mercedes S-Class is still the car to beat – but the A8 has closed the gap further here in its latest iteration.

The A8 60 TFSI e is powered by a 3.0-litre V6 petrol engine and a 134bhp electric motor, fed by a 14.1kWh battery and mated to an eight-speed automatic gearbox, as well as Audi’s trademark quattro four-wheel-drive system. Together, the petrol engine and electric motor produce 443bhp – enough for some pretty impressive performance figures from what is a large, heavy car.

Overall, the hybrid system works well; left to its own devices in Hybrid mode, the A8 is capable of shuffling between power sources almost imperceptibly – but sometimes this can be accompanied by driveline shunt and unwanted lumpy gearshifts, especially under harder acceleration off the line. Not a deal-breaker, but in a car pitched at this end of the market, mechanical lumps and bumps should really be filtered out.

Both the standard and long-wheelbase versions of the A8 manage 0-62mph in 5.9 seconds and charge on to a limited top speed of 155mph – or 111mph on electric power alone. Put your foot down in hybrid mode and there’s effortless performance on tap; overtaking is easy and yet serenely silent. In all-electric mode, 0-37mph (0-60km/h) takes 6.9 seconds

The A8 hybrid isn't a sports car by any stretch, but it at least feels planted, safe and grippy, especially thanks to its great four-wheel-drive system. The driving experience remains largely distant, with the driver understandably isolated from what’s going on. It’s supremely relaxing, though – and that’s what cars like this are all about.

If you really must retain the capacity for fun in corners, the BMW 7 Series comes closest to feeling like a sporty saloon from the driver’s seat – but it’s still a massive luxury car that’s really meant for chauffeuring duties.