Plush materials, top-tier technology and acres of space make the Audi A8 TFSI e one of the most luxurious saloons around 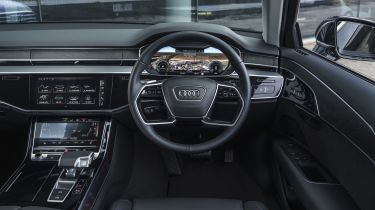 The Audi A8’s entire reason for being is luxury: it’s got to fly the flag for the German brand’s technological prowess while also offering a level of sophistication and comfort that its typically VIP users will expect.

The leader in this department is the Mercedes S-Class – a serious rival for the Audi in plug-in hybrid S 560 e guise – but the A8 does the best job yet of getting close to that car’s superlative comfort and refinement. Travelling inside the A8 is a serene and fairly silent experience, especially sitting in the optional power-adjustable rear seats, but the Mercedes just pips it for outright ride quality.

The BMW 7 Series – the other main contender in this class – manages to be marginally more comfortable while being far more driver-focused. However, this won’t matter to many. The BMW is a match for the Audi in the interior stakes, too, and we prefer its infotainment system.

Modern Audi interiors are slick, sculptural affairs. It’s a style that looks great in the A8 and everything is solidly put together as you’d expect, but you’ll have to really like shiny black piano-effect plastic – we found that while it looks good, it tends to attract fingerprints and dust.

There’s a distinct lack of buttons to play with, as a number of major functions are controlled by the lower touchscreen. The A8 does without the ergonomic infotainment controls of its Mercedes and BMW rivals, so it pays to be prepared to accept some smudges on your screens.

The A8 hybrid doesn’t fall short in the equipment department. As standard, it gets LED headlights, adaptive air suspension, 19-inch alloys and an acoustic windscreen on the outside, along with power-adjustable heated front seats, four-zone climate control, a cooled glovebox and wireless phone charging on the inside.

The A8 L model benefits from more passenger-centric equipment, including electric sunblinds on the rear windows, a remote control, a music interface for rear-seat passengers and heated rear seats.

Highlights of the options list (separated into bundles called packs) include a Bang & Olufsen sound system, a rear-seat entertainment system with digital TV connectivity and an upgraded rear seat package with footrests. 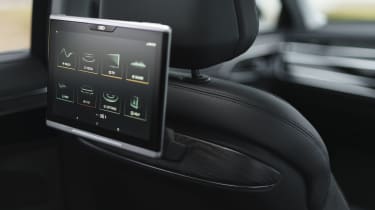 Some may miss the ergonomic rotary dial of older Audi MMI systems (and current rivals), but overall the system works well – provided you get on with the haptic buttons and don’t mind a screen covered in fingerprints.