As one of the largest cars in Audi’s range, the A8 TFSI e majors on space, if not ultimate versatility 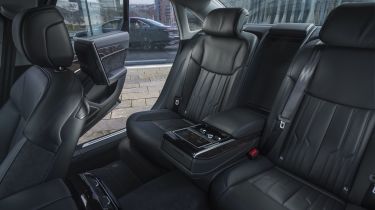 The A8 is the largest saloon in Audi’s range and so it follows that it’s one of the most practical, especially in long-wheelbase form. In fact, the A8 is more likely than many cars to spend much of its life ferrying adults around in the rear seats. It’ll carry a lot of luggage to and from airports, too, so it’s good news that there’s plenty of space for suitcases in the back.

You can have your A8 hybrid in one of two wheelbase lengths; which one you pick is likely to be determined by how much space you want rear-seat passengers to have. Our hands-on test was of the longer A8 L, which at just over 5.3 metres is the longest car in the class. Its wheelbase of just over 3.1 metres means there's space for even the tallest people in the rear seats.

Audi is known for its high-quality interiors and the A8’s is no exception, filled with (mostly) high-quality plastic and plush leather. With the £2,195 Rear Comfort Pack, the standard rear bench is upgraded to a ‘2+1’ layout, complete with power-adjustment, footrests, lumbar support and LED reading lights, plus acoustic double-glazing throughout to further improve what are already high levels of refinement. 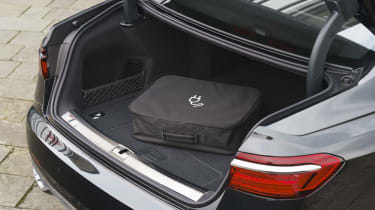 The plug-in hybrid A8 has to make some room for its batteries but still offers a large 390-litre boot; just five litres down on the Mercedes S 560 e L, but some way behind the BMW 745Le xDrive's 420 litres. You can’t fold the seats down to expand the boot, but a powered tailgate is standard, as are power-closing doors.