Is an electric car safe in a crash?

Accidents happen, so how safe is an electric car in a crash compared to a conventional vehicle? The answer is a reassuring one... 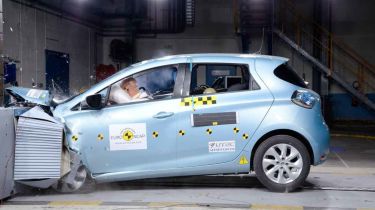 Back in 2017, there were more than 180,000 road accidents in the UK. While most of these were minor bumps and scrapes, there's no getting away from the fact that more serious prangs are a daily occurrence.

The newest vehicles – both electric and non-electric – increasingly feature safety aids such as autonomous emergency braking (AEB) that are designed to prevent collisions from happening, however it will be decades before the roads get close to being entirely accident free.

Search the internet for electric-car crashes and you may find examples of electric vehicles that have caught fire, however the reality is very different: electric cars are just as safe as petrols and diesels, and outbreaks of fire are exceedingly rare.

How safe are electric vehicles?

When measuring both occupant and pedestrian safety, the overriding authority on the subject is the Euro NCAP (New Car Assessment Programme). They are the European vehicle safety body and oversee official safety testing of new cars. Most electric cars on sale today have received the top, five-star, rating from Euro NCAP.

What this means is that, in the event of an accident, they protect both occupants and pedestrians extremely well, and feature technology that aims to prevent collisions from happening at all. As well as AEB, lane-keep assistance, blind-spot monitoring and speed-limit recognition systems are all becoming more and more common.

Yes, they can. Just like petrol and diesel cars, electric vehicles carry a small risk of catching fire. However, while the petrol in a normal car requires a spark or flame to ignite, the lithium-ion batteries on board electric vehicles do not.

Although manufacturers and battery makers have made huge strides in improving vehicle safety, a violent crash in an electric vehicle can still result in the car catching fire. This can happen if the battery short circuits and heats up. Lithium-ion batteries are susceptible to heat and if they warm up too much, they can ignite.

If one cell catches fire, there can be a chain reaction within the whole battery resulting in the vehicle catching fire.

However, it must be stressed that manufacturers have made huge strides in ensuring this doesn’t happen. Manufacturers like Tesla and Nissan have built in fail-safe circuitry that shuts down the battery when its voltage increases beyond safe limits.

Manufacturers have also provided guidance for emergency crews on how to handle electric and hybrid vehicle fires. They highlight areas that can be cut and areas that cannot, with the latter including areas that have high voltage wires running through them.