Volvo XC60 Recharge isn’t quite as practical as regular models, but there’s still enough space and versatility here for most families 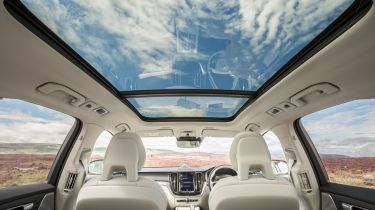 Passenger space is strong, as is load space, so the XC60 should be a practical family SUV that boosts efficiency. That’s down to the technology under the stylish body. Packaging is good, so there’s space inside for four, but even loaded up with five occupants there’s still plenty of room for medium-length journeys.

Leg and headroom are both good in the back, thanks to the SUV body’s high roofline. The seating position is also quite upright as a result of this, but this allows you to tuck your feet under the seats in front with a comfortable break in your knees, so it’s an effective use of space.

There’s a large tray behind the gearlever with a roller-shutter cover, the door bins are big and the glovebox and central area between the front seats give plenty of space to stow items out of sight. Along with the ride, the seats are wonderfully supportive in the front, so you’ll feel relatively fresh even after a long journey. 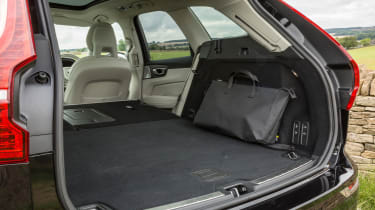 There’s plenty of space inside the, as the XC60’s battery is stored in the spine of the car, where the driveshaft that supplies the rear wheels with power would usually go in a regular model. As the car was designed as a plug-in hybrid from the outset, there aren’t many drawbacks here.

The reason for this slight reduction in boot space is due to the rear-mounted electric motor and the associated control electronics the XC60 has to package.