The Volvo V90 Recharge T8 has been replaced by the less powerful T6, now an even better package if you need low running costs and practicality 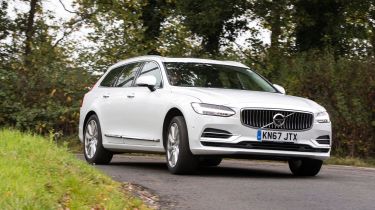 No matter your requirements, there is now a plug-in hybrid version of every Volvo model on sale. That goes for all three of its SUV, both of its saloons, and each of its estate models – including its range-topping V90. However, while the maker pitched its initial offering as a performance-oriented flagship, in 2020 it changed tack – replacing the powerful T8 with the less-potent Recharge T6.

The V90 Recharge – both the outgoing T8 and new T6 version – is probably the most bread-and-butter plug-in hybrid the firm serves up, given Volvo’s tradition of making large estates. In the past decade or so, Volvo has charged upmarket to take the fight to the established German players; becoming a bona-fide premium manufacturer, the maker now produces cars of a quality high enough to potentially sway the usual Mercedes, Audi or BMW buyer.

The V90 Recharge is no exception to this, with a sharp design, a wonderfully finished interior, great infotainment and technology, a healthy spread of driver-assistance features and a powerful plug-in hybrid powertrain. Presently, its only direct competitor is the Mercedes E-Class plug-in hybrid estate, although BMW is readying an estate-bodied version of its 530e executive car.

As the range-topping variant of the V90 estate, the T6 (and its predecessor, the T8) is only available in two trim levels. R-Design gives the car a sportier look inside and out, with a bodykit, slightly-lowered suspension, 19-inch alloy wheels and a black leather interior featuring sports seats. Inscription is focused more on comfort and luxury. It looks a little more under-the-radar than the R-Design, but still rides on 19-inch wheels. Nappa leather is used inside, available in a choice of colours, while the seats are cushioned and have lumbar adjustment.

Power for the T6 model comes from a turbocharged 2.0-litre four-cylinder petrol engine plus an electric motor, making this an all-wheel-drive estate capable of all-electric running over shorter distances, while also being able to crack 0-62mph in 5.9 seconds. The petrol engine powers the front wheels, while an 86bhp electric motor powers the rears. 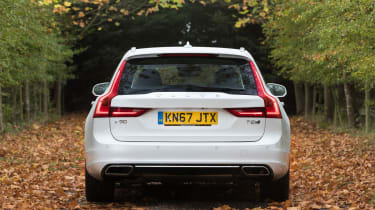 By default on start-up, the V90 runs as a hybrid, using electric power at low speed before the engine kicks in. Flick the V90 into ‘Pure’ mode and it’ll rely on electric power alone, using which it's good for 78mph and over 30 miles of driving.

To unlock maximum power, you need the 11.6kWh battery fully charged and the car primed in Power mode, which sets it up to achieve that claimed 0-62mph time and adjusts the steering to feel sportier. A permanent all-wheel-drive setting is the final drive mode.

While the V90 Recharge has pace aplenty, it isn’t that sharp to drive. If you’re expecting hot hybrid thrills, this maybe isn’t the car for you – it feels a little heavy in corners as a consequence of its weighty powertrain, while the steering is dull as well. Instead, this is a sumptuous cruiser with fantastic high-speed refinement. Its part-electric powertrain makes it excellent around town, too.

The strong straight-line pace combines with excellent comfort and quietness on the move, making the plug-in V90 a great car to whittle away motorway miles in. Ride quality is especially strong, even if you go for some of the larger wheels available on the options list. Optional air suspension helps out in this regard as well.

For more on the Volvo V90 Recharge hybrid T8 and T6 models, read on for the rest of our in-depth review.