The plug-in hybrid Volvo V90 Recharge T6 serves up great cross-country pace, but is more relaxing than thrilling to drive 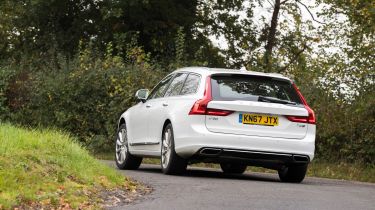 When the Volvo V90 plug-in hybrid launched, it featured the brand's range-topping T8 powertrain. This variant was dropped in early 2020, in favour of the less-powerful T6 model. This is no bad thing, however – it's very nearly as fast, but more affordable to buy and run.

The V90 Recharge hybrid – whether you go for the new T6 or the outgoing T8 – is versatile and fast, with performance-car-humbling pace. A lot of that is down to the huge amount of torque generated by the hybrid powertrain, pairing instant electric shove with petrol power picking up the slack at higher speeds. This car isn't the last word in driving engagement, however, and still steers towards being comfortable rather than thrilling in corners.

The V90 Recharge T6 hybrid is a variant of the regular V90 and not a model in its own right. As such, there's only one powertrain option – despite the fact it was previously offered in more powerful T8 form.

The 2.0-litre turbocharged and supercharged four-cylinder petrol engine up front produces 250bhp and sends drive to the front wheels through an eight-speed automatic gearbox. At the rear, an 85bhp electric motor is fed power from an 11.8kWh battery, making for a four-wheel-drive powertrain with a total system output of 335bhp.

Set it up for 'maximum attack' using the Power drive mode and you’ll find out just how fast petrol and electric power can feel when combined, thanks to the low-down torque from the electric motor. Acceleration from 0-62mph takes 5.9 seconds and like all new Volvos these days, top speed is capped at 112mph. The V90 Recharge is quiet on the move and under acceleration; it's a car you’ll easily see off motorway miles in.

From behind the wheel, the V90 Recharge can best be described as solid, but not overtly sharp. Both the outgoing T8 and newer T6 pack enough punch to be performance-car bruisers, they err on the side of caution when it comes to handling. The steering is well weighted, and weights up further if you push the car into Power mode.

However, there’s not much communication as to exactly what the front wheels are doing, and again, the Volvo's considerable weight means this isn’t a car you can hurl into corners at great speed. It's a comfortable cruiser, not an outright performance machine. So take things steady and rely on the power and torque in a straight line where necessary.

Underpinning the V90 Recharge's credentials as a motorway car is its list of standard driver-assistance systems, including adaptive cruise control and semi-autonomous capability. When enabled, this feature helps you keep the car in its lane on motorway-style roads.