Volvo equips the V90 Recharge T6 plug-in hybrid with plenty in the way of driver-assistance and safety features, and reliability should be good 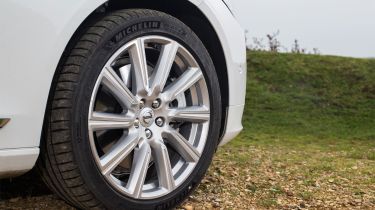 Volvo trades on its image of producing safe and reliable cars. As such, the level of standard safety and assistance features on the V90 Recharge T6 hybrid is particularly strong compared to rivals – and this is all underlined by a strong showing in Euro NCAP crash-testing.

Volvo’s reputation for quality cars is strong, and that's backed up by data in the latest Driver Power owner satisfaction survey. While the V90 (along with its S90 saloon sibling) didn't feature in the 2020 survey's rundown of the best cars to own, the XC60, with which the V90 shares a platform, finished in an admirable 30th place.

The smaller XC40 fared even better, with claiming 14th spot in the list. We do know that early examples of the V90 exhibited one or two software gremlins, but these have since been updated and rectified.

Volvo continues to market itself as a safety-focused brand and that’s reflected in the level of standard safety and assistance equipment here, plus the V90’s strong showing in Euro NCAP crash-testing. The car was awarded a perfect five stars in 2017, with a 95% rating for adult occupant protection and 80% for child occupant protection. A 76% score in the notoriously difficult pedestrian safety test was impressive, too.

A safety assistance score of 93% can be put down to the likes of standard automatic emergency braking (AEB), which can detect pedestrians, cyclists and animals – not just stopped vehicles – ahead in the road. The setup is called City Safety, and can bring the car to a complete halt, too.

It can also assist with rapid evasive moves at speeds between 31 and 62mph by braking the inner wheels and reinforcing your steering inputs if it detects you’re rapidly trying to avoid a hazard. Elsewhere, there’s Volvo’s Run-Off Road protection system. This detects if the car has left the road uncontrollably and prepares the vehicle for impact by tightening the seatbelts as much as possible.

The Pilot Assist semi-autonomous driving aid is standard – such a feature is left on the options list on many of the Volvo’s rivals. When the Pilot Assist feature isn’t enabled, lane-keeping assistance and a driver attention alert system take its place.