The Volkswagen e-Golf is expensive to buy compared to some key rivals, but classy finish and comprehensive equipment help to make up for it 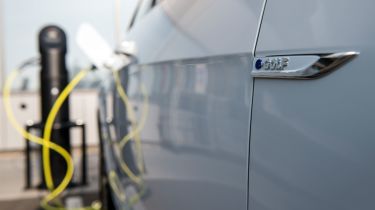 The e-Golf looks relatively expensive, but it's eligible for the Government’s Plug-In Car Grant and was recently discounted, so you can get behind the wheel for just over £27,500. There’s also the cost of installing a wallbox charger to consider: this also attracts a government grant, but will still cost you between £300 and £1,000.

You can buy a Nissan Leaf or the smaller Renault ZOE for quite a few thousand pounds less, but neither has the badge appeal of the Golf, nor the build quality typically associated with Volkswagen. You can buy a Toyota Prius Plug-In for similar money, or spend quite a few thousand more on a BMW i3. That makes the e-Golf look pretty solid value, as it’s definitely among the class leaders for both usability and desirability.

Once you’ve taken the plunge, it’s time to enjoy the rewards. Even a full charge should cost less than a fiver with average overnight electricity rates lower than 15p per kWh – and if you’ve only driven 30 miles, you’ll spend a lot less than that. It’s not quite motoring for pennies, but it’s not far off.

The picture is even rosier if you’re a company-car user, as the Benefit-in-Kind company-car tax rate of 16% for 2019/20 is a big saving over what HMRC for driving a similarly priced Golf GTD. The e-Golf’s BiK rate will fall to zero in 2020/21 and other significant benefits include exemption from road tax and the London Congestion Charge.

While the e-Golf feels pretty quick off the mark, it’s not as punchy as the similarly priced Golf GTD. That puts the e-Golf into insurance group 20, compared to the GTD’s group 27. The BMW i3 is group 21.

Most of the e-Golf is covered by the manufacturer’s standard three-year/60,000-mile warranty, but the battery gets its own eight-year cover.

An internal-combustion engine has more moving parts than an electric motor, and tends to have a more frequent requirement for servicing. Volkswagen reckons the e-Golf needs its first service after two years or 20,000 miles, and once a year after that. A service plan for the first two years costs £297.

All electric cars are currently exempt from road-tax charges, so of course the e-Golf benefits from this.

Depreciation hasn't always been friendly to the first owners of many electric cars, but the e-Golf is predicted to perform better than quite a few other models in the Golf line-up. Its 45% predicted resale value after three years and 36,000 miles is only bettered – a little – by the most desirable Golfs, such as the GTI models.