The Toyota Yaris Hybrid is economical, spacious and easy to live with, but also pricey, unexciting to drive and occasionally noisy

The supermini class is one of the hardest-fought of all and the Toyota Yaris has been a stalwart since the turn of the millennium. It's never been the belle of the ball, though – while the Ford Fiesta, Volkswagen Polo and SEAT Ibiza hog the limelight, the Yaris has played second fiddle.

There's good reason to give it more attention, though. It's currently the only supermini to offer a hybrid engine option and it's now more sophisticated than ever, having been updated over the years to keep it relevant. In fact, the current Yaris has been around since 2012 and its slightly outmoded design is actually a blessing in disguise – as will be explained later on.

The hybrid engine is a welcome addition to the Yaris range, bringing better fuel economy and lower CO2 emissions than the petrol version, without having to resort to diesel power. In fact, the entry-level Yaris Active Hybrid, which rides on relatively narrow, fuel-efficient tyres, is claimed to return up to 59mpg.

It also brings genuine zero-emissions motoring, albeit for very short distances. In fact, although there's a button to activate an 'EV mode', the car's electric motor is really only intended to fill gaps in a journey where running the petrol engine would be wasteful. In urban traffic, for instance, when you're trundling along at a few miles per hour, or when parking.

If this sounds like you, and your average daily trip is only a few miles, you might find that a tank of petrol in your Yaris Hybrid lasts a very long time indeed. If your regular journey is mostly spent in free-flowing traffic, though, you may find the hybrid only marginally more economical than a petrol. There's a more tangible advantage if you're a company-car user, though – the hybrid has a lower Benefit-in-Kind tax liability than most petrol or diesel rivals.

The greatest downside to the Yaris Hybrid is the way it drives. It's in no way unpleasant – dull is probably a fair adjective. There's little feedback through the steering wheel or other controls, the body leans markedly in corners, and the suspension is neither absorbent enough to soothe passengers nor controlled enough to entertain the driver. 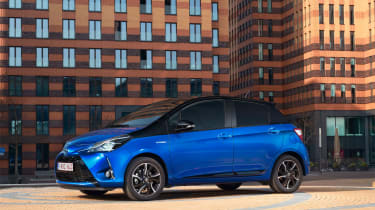 What's more, the promise of a substantial 1.5-litre petrol engine and the potential boost of an electric motor turns out not be realised in outright performance – acceleration is quite gradual, and would be relaxing if it wasn't for the noise kicked up when the hybrid's CVT gearbox sends revs soaring noisily for as long as it takes for cruising speed to be reached. Sustained speeds are no problem, but getting to them can be rather tiring.

It's an unfortunate blot on the Yaris Hybrid's copybook when you consider how much the Yaris has to offer. Even the entry-level Active is relatively well equipped in hybrid form (hybrids get dual-zone air-conditioning across the range, while the petrol Active does without) and our favourite trim level, Icon, is very generously specced. The dashboard isn't the most creatively designed, but it's easy to use and forms the centrepiece of what is arguably the most user-friendly interior of any small car.

We mentioned its dated style earlier on, but the tall roofline and big windows that seem to have become unfashionable actually make for a really light, spacious interior, and its proportions give rear-seat passengers stretching-out space that direct rivals can only dream of. It takes a far bigger car to beat the Yaris for interior space, and while the 286-litre boot is smaller than some rivals', many will forgive the Yaris for that.

It should prove a safe car, too, with the reassurance of a five-star rating from the crash-test experts at Euro NCAP, and the Toyota Safety Sense package of autonomous emergency braking (AEB), lane-departure warning and auto-dipping headlights.

Overall, though, the Yaris Hybrid is a less balanced package than its petrol sisters. It's hard to ignore that it costs around £1,300 more than the automatic petrol versions of each trim level, and it's less fun to drive than the far cheaper manual models that share its brilliantly designed interior.

All that makes the Yaris Hybrid difficult to recommend, unless hybrid power is important to you. It's less expensive, for example, than a Toyota Corolla, Kia Niro or Hyundai Ioniq, and pretty much a match for each of those when it comes to interior space. Its five-year/100,000-mile warranty is a close match for the Hyundai, too, while and Toyota has a great reputation for reliability.

For a more detailed look at the Toyota Yaris Hybrid, read on for the rest of our in-depth review. You can also learn more about the forthcoming new Yaris, arriving in 2020.