Low CO2 emissions make the Toyota Corolla Saloon an attractive company car, and other running costs are low, too 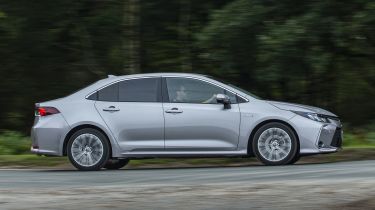 With prices starting from around £24,000, the Toyota Corolla Saloon looks like a keen proposition in a market where premium vehicles are more prominent. The Ford Mondeo Hybrid costs from around £26,000, while the BMW 330e plug-in hybrid costs a great deal more.

Fuel economy of 54-66mpg should ensure that trips to the petrol station are few and far between, but unfortunately, the Corolla Saloon misses out London Congestion Charge exemption.

As with all of Toyota’s passenger cars, the Corolla Saloon comes with a 100,000-mile/five-year warranty. Depending on how long you expect to own the car and your anticipated annual mileage, only Hyundai’s unlimited-miles/five-year warranty and Kia’s seven-year/100,000-mile warranty offer more reassurance.

Servicing prices for the Corolla Saloon have yet to be confirmed, although they shouldn’t deviate too far from those of the Auris. An ‘Intermediate’ service cost £185 on that particular model, with a ‘Full’ service and ‘Full Plus’ service costing £335 and £395 respectively.

As a hybrid, the Corolla Saloon attracts a road-tax rate of £140 a year, which is a small discount on the £150 a year paid by owners of purely petrol or diesel-engined cars.