The Smart EQ ForTwo is a fantastic city runabout, but it’s hampered by its two-seat body, limited practicality and relatively short electric range 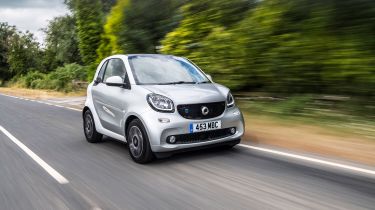 The Smart EQ ForTwo is an excellent urban runaround. While it can’t offer the range of larger, more expensive electric cars, its tiny footprint, peppy performance and desirable image should cater for those looking for a car that’s cheap to run and easy to drive.

They're all aimed at customers after a small electric car that's easy to park and cheap to run. With a maximum range of only 70 miles, the Coupe can't go as far as some more modern, more expensive electric cars. Still, it’s more than capable of tackling the average urban commute.

It was launched in 2016, and more recent models (badged EQ) offer faster charging options than the earlier Electric Drive (ED) cars. Now, with a home wallbox, you can charge the ForTwo's batteries to 80% full in less than 40 minutes. Plug it into a standard three-pin household plug and the same charge will take around six hours.

The ForTwo's trim structure is fairly simple, with just three specification levels to choose from. The standard car comes fairly well equipped, with a seven-inch touchscreen and parking sensors. Premium Plus adds ambient lighting and automatic wipers, among other desirable extras. Special Nightsky editions get funky blue details and a Brabus bodykit.

When you take into account the government grant of £3,500, the ForTwo costs around £4,500 more than the equivalent petrol Smart. 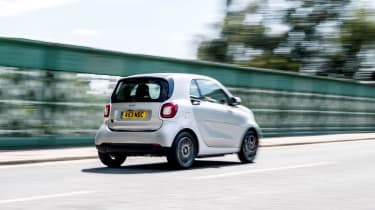 As previously mentioned, this is a car for city driving, with a tight turning circle and excellent visibility. It’s quick off the line and easy to manoeuvre, but up the pace and you’ll find the Smart quickly runs out of puff.

Those after a small electric city car will like the Smart EQ ForTwo, but buyers after something more practical should look to larger cars like the Renault ZOE.

For a more detailed look at the Smart EQ ForTwo, read on for the rest of our in-depth review.