Don’t be fooled by the Smart EQ ForTwo's size: this is one surprisingly tough city car 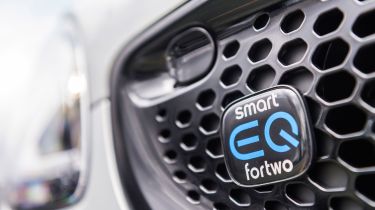 Smart is to Mercedes what MINI is to BMW. Being owned by an established conglomerate means all of Mercedes’ engineering know-how was tried and tested long before it appeared in the humble EQ ForTwo. In fact, further tie-ups with the Renault-Nissan-Mitsubishi Alliance mean the Smart city car has plenty in common with models such as the Renault Twingo, too.

While it doesn’t feel as solid as a Mercedes S-Class inside, the cabin is well built and there have been very few complaints about build quality in the time since the EQ launched. If you're concerned, the standard three-year/unlimited-mileage warranty should put your mind at ease.

The Smart ForTwo didn’t feature in our sister title Auto Express' 2018 Driver Power owner satisfaction survey, but the fact it shares so many parts with various Renault and Mercedes models should make it a reliable car.

Electric cars are often more reliable than their petrol or diesel equivalents due to the fact they have fewer moving parts and complex engine components. Most models will spend the majority of their time in and around town, with less stress on vital parts than you might find on a car designed for motorway driving.

Despite its size, the Smart ForTwo fared well in Euro NCAP’s stringent crash-safety tests when it was assessed back in 2014. Yes, the process has been made harder in recent years, but the four-out-of-five-star NCAP score is not to be sniffed at.

At the time of testing, the Smart ForTwo managed an admirable 82% score for adult occupant protection, as well as 80% for child occupant protection. A score of 56% in both the pedestrian protection and safety assist categories was less impressive, however. All Smart EQ ForTwo models get anti-lock brakes, electronic stability control, a driver’s knee airbag, and autonomous emergency braking.

The Volkswagen e-up! is safer still, though, gaining a full five stars. Helped by a solid 86% score in the safety assist category, the up! also triumphed with an 89% rating for adult occupant protection.