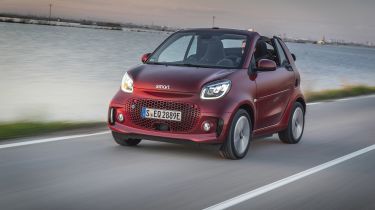 Smart has made the transition from petrol to electric, and from 2020 boasts a range of pure zero-emissions cars. The iconic EQ ForTwo is the best-known of the lot, but there’s also an electric four-seat, four-door, ForFour version, and a two-seat ForTwo Cabrio.

All badged with Mercedes’ EQ branding, every electric Smart uses the same 80bhp motor and 17.2kWh battery; in the ForTwo, this combination is enough for a claimed range of up to 82 miles. Performance is decent but nothing spectacular, with 0-62mph taking 11.9 seconds. It’s best to stick to the city, though, as the top speed is just 81mph, and that short wheelbase can make it a bit fidgety on the motorway.

The good news is that the Smart ForTwo is great fun to drive, especially around town. Its turning circle is tighter than a London Taxi's, and it has the sort of zippy response that makes hitting gaps in traffic a doddle. It’s very light and drive goes to the rear wheels, giving the feeling your being pushed, rather than pulled – just as you would in a high-end sports car.

Charging speeds for the ForTwo are a little slow compared to some of the competition, as it's limited by the 22kW on-board charger. That's as fast as it'll charge, even if you plug in to a 50kW or 100kW public charger, so it’s best to invest in your own home wallbox and charge overnight if possible.

The ForTwo has style on its side – a recent redesign gave it an upmarket look that sets it apart from its more humdrum rivals – and while the interior is fairly plasticky, it still feels well made. Unfortunately, all Smart models use a somewhat disappointing infotainment system that’s shared with older Renault models. It has Android Auto but no Apple CarPlay connectivity, but regardless, it isn’t the most responsive system on the market. 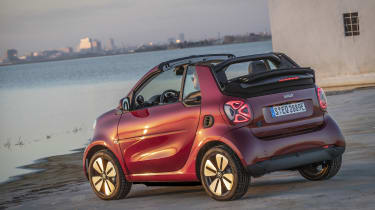 The Cabrio is only available in the top three trim levels in the ForTwo range: pulse premium, prime exclusive and edition one. A set of 16-inch alloys is standard on all, but the design varies depending on the trim level you go for; stepping up to prime exclusive adds leather seats, ambient lighting and full LED headlights, among other stylish touches. Edition one cars are altogether more sporty looking and set off by a styling pack from Mercedes tuner Brabus.

Naturally, all Cabrio models get a power-folding soft-top that can be stowed in 12 seconds. The trade-off for the option of wind-in-the-hair motoring is a reduction in refinement at higher speeds (even with the roof up), but this won’t matter to those who spend most of their time driving in town.

Price aside, no matter which version you go for running costs will be low; there's no road tax to pay, and every version falls into the zero company-car Benefit-in-Kind (BiK) tax band for the 2020/21 financial year. Charge at home off peak and topping up the Smart’s batteries will cost just a few pounds.

Reliability should be good, despite parent company Mercedes’ poor showing in the 2020 Driver Power satisfaction survey. With fewer moving parts than an internal-combustion car, there’s very little on the electric Smart to go wrong, while the high running costs often associated with flashy Mercedes are clearly no cause for concern here.

Choosing the ForTwo Cabrio is a real exercise in heart over head – it makes much more sense to pick one of its cheaper, larger, more practical rivals, most of which also offer a much more useful range. Our favourites include the Renault ZOE, SEAT Mii electric and Volkswagen e-up! – but none of those have the top-down appeal or city-slicker charm of the Smart. 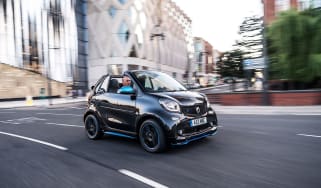 The Smart EQ ForTwo Cabriolet is the only convertible electric car on sale, but the Coupe version’s compromises apply here, too
Skip to ContentSkip to Footer