Despite being produced by Mercedes, the Smart EQ ForTwo can’t match its sleek siblings for interior quality 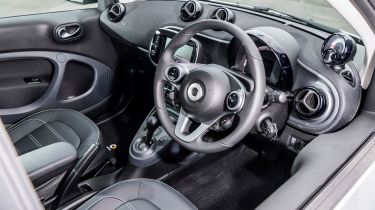 The Smart ForTwo launched back in the late 90s as a cool alternative to the dull and dreary city cars on sale at the time. Now in its second generation, it continues to offer a unique take on urban transportation.

Despite measuring just 2.7 metres long, there’s plenty of room inside for two people. Quality is fine, but isn’t a patch on the Volkswagen e-up!, which feels more solidly built. But the simple design is logically laid-out, and everything feels easy to use.

The seats are comfortable enough for short trips, which is perfectly adequate, as the Smart ForTwo EQ will spend most its life pootling in and around town. There’s not a huge amount of adjustment in the seat and steering wheel, but enough to get comfortable for short urban journeys.

The EQ ForTwo's dashboard is smart, simple and functional. It isn’t the last word in luxury, but everything is easy to operate and built to withstand the rigours of everyday life. Every car comes with a smart central touchscreen lifted from the Renault Twingo, and while it isn’t laden with functionality, the tiled menus are straightforward enough to navigate.

Behind the steering wheel lies a digital trip computer and large analogue speedometer, which reaches left to right in a large semi-circle. A separate pod juts out from the speedo housing, showing how much charge is left in the batteries.

Fortunately, the air-conditioning buttons are located away from the central touchscreen, just ahead of the gearlever. The sliding temperature scale is easy to use, but feels a bit low-rent alongside the digital climate controls found in some rivals.

All EQ ForTwos come with a decent level of standard kit. Every version gets at least 15-inch wheels, heated seats, rear parking sensors and a panoramic roof. Electric windows, a digital radio and remote central locking are also included.

Fortunately, every Smart EQ ForTwo comes with a touchscreen infotainment display. While it feels a little basic compared to more modern units in rival cars, the seven-inch screen will feel familiar to anyone who has driven a Renault Twingo, Clio or ZOE.

The system features AM/FM and DAB radios, as well as auxiliary and USB inputs. Bluetooth is also standard, as is a TomTom-based 3D sat nav, with three years of LIVE updates included as standard. Most of the menus are easy to operate, and there’s a handy ‘Home’ button that directs you straight back to the main screen.

In addition, you can download the Smart EQ Control app to your smartphone, which can tell you how much your car has charged, plus information on other vehicle functions.