Each of these cars is fast and great to drive, but the Jaguar I-Pace feels punchiest and the most nimble 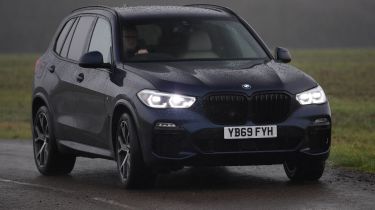 With SUVs having taken over much of the market demand for luxury saloons and estates, it's not enough for them to be high-riding cruisers or useful in bad weather – they have to drive well too. Each of the SUVs in this test is positioned towards the sportier end of the SUV spectrum, so each offers a blend of performance and handling that tries to bely its size and weight.

Speaking of weight, the BMW X5 is the heaviest car here by around 200kg, yet does its best to negate its 2.5-tonne kerbweight. Its powertrain certainly helps: total power from its six-cylinder turbocharged petrol engine and electric motor is 389bhp, with 600Nm of torque on tap. It's the least powerful car here but still feels fast, delivering its power with very little undue noise or fuss. The integration of the electric motor is excellent.

The X5 is good to drive but is the least engaging of the three: the Porsche boasts more communicative steering and the Jaguar feels more precise. The X5 exhibits the most roll in corners and feels the most comfort-orientated of the bunch; the standard air suspension proves very comfortable the rest of the time, only lacking the supple nature of the Porsche's set-up if you hit a particularly big bump. 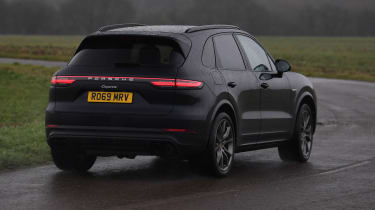 The Cayenne is, as you might expect, the best car to drive. Drawing on its experience building some of the world's best sports cars, Porsche has imbued the Cayenne with great steering, huge reserves of grip and a sure-footed feel that helps disguise its weight. It's got the best driving position of the three, feeling more sports car than large SUV.

Performance is just as impressive. The 456bhp and 700Nm of torque from its 3.0-litre V6 and electric motor is enough for a 0-60mph sprint of 4.5 seconds. Overall it's nearly as fast as the I-Pace, and matches both rivals for refinement. Our test car was fitted with optional air suspension, which adds a more supple edge to the car's ride quality and feels more befitting of a luxurious SUV. It's very comfortable – just as much as the I-Pace – but there's still a slightly firmer edge than in the BMW; a trade-off for that sporty ability. 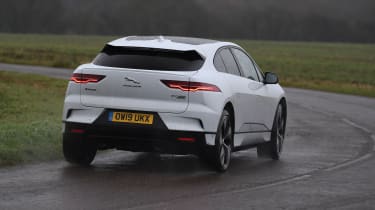 While each of the plug-in hybrids do a great job of using their electrified petrol engines to deliver quiet, smooth, torquey performance, neither can match the instant response and relentless linear acceleration of the Jaguar I-Pace's twin electric motors, which together produce the equivalent of 395bhp and 696Nm of torque. It's relative lack of power is countered by it being the lightest car here, despite its large battery.

The I-Pace performs all of the essential electric car party tricks: instant get-up-and-go from a standstill and on-demand torque regardless of your current speed. The I-Pace is the quickest of the three on paper in acceleration terms and it feels it in the real world too. The I-Pace also has the most convincing brakes of all three – probably thanks to its lighter weight – while the electric powertrain's regenerative braking can be set to allow for one-pedal operation.

The I-Pace is almost as much fun to drive as the Cayenne and certainly feels just as poised and light on its feet. There's a welcome lack of body roll and even on 20-inch wheels the car's air suspension (a cost-option) there's a pliancy to the ride that'll keep occupants comfortable.