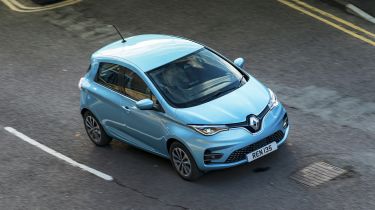 The Renault ZOE seems expensive when you glance at the headline price. This is a Clio-sized car, after all, and a price north of £26,000 seems a lot.

The reality is that electric cars are still more expensive than their petrol equivalents, but matters are improving and finance deals on the ZOE that see monthly payments of well under £300 with a fairly low deposit will make this attainable to a lot of people. It also makes the ZOE comparable in terms of costs with ITS chief rivals the Peugeot e-208 and Vauxhall Corsa-e.

Fully charging the ZOE at home will cost about £7 (assuming an average electric tariff of 14p/kWh), but using late-night off-peak rates could halve that. Charging at a motorway rapid charger is always going to be more expensive; these tend to cost around 30p per kWh, so assuming a top-up from 20-80%, you’re looking at just under £10 per visit. Given that the ZOE promises great efficiency at a potential 4.7 miles per kWh in good conditions, it’s likely that your money will go a bit further in the Renault than in its rivals.

The ZOE falls into insurance groups 19 to 23, depending on which model you choose. This is noticeably higher than you’ll pay for an equivalent diesel Renault Clio, which falls into group 10, so do check insurance costs before settling for the ZOE if you’re a new or young driver.

The Renault ZOE is covered for five years or 100,000 miles, which is better than many rivals, if not as good as the cover you get on a Kia e-Niro. The batteries are covered against failure or significant degradation for eight years or 100,000 miles. Roadside assistance is provided for four years (breaking down to three years' UK and European cover, plus an additional year of UK-only).

Renault offers various fixed-price servicing plans, starting at £449 for three years or £669 for four years, and you can spread the cost with monthly payments of as little as £9. A service is required every year or 18,000 miles.

As with every zero-emissions car, the Renault ZOE is exempt from VED (road tax) for the foreseeable future, and it'll also cost you nothing to run one as a company car during the 2020/21 financial year.

Predicting residual values is a dark and imprecise art, but industry specialists have suggested that the ZOE’s significant overhaul means it'll be worth some £3,000 more than an equivalent pre-facelift ZOE on the used-car market after three years and 30,000 miles. Its depreciation is even forecast to be slightly better than for the Peugeot e-208 and Vauxhall Corsa-e, both of which have a shorter range.