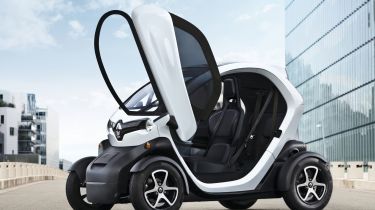 The Renault Twizy is aimed partly at drivers who might otherwise be considering two-wheeled city transport, in which case it’s a significantly safer way to get around.

Not only because it comes with seatbelts and an airbag, but because you’re much more visible, and four wheels mean you’ll never fall over when road conditions are slippery.

With a 50mph maximum speed, the Twizy should give its driver plenty of time to recognise potential hazards, too.

The Twizy hasn’t made it into our Driver Power survey, simply because so few have been sold and registered for use on UK roads. That said, there’s not very much that can go wrong with a Twizy, and while electric cars may seem futuristic, the underlying drive technology has been around for years – the motor in your washing machine arguably has a tougher life.

People do worry about the possibilities of expensive batteries becoming less efficient over time, but Renault has addressed that by forcing Twizy drivers to rent their batteries on a monthly basis. So if a battery wears out or becomes faulty, you can simply replace it under the terms of your contract – although keep in mind Renault only guarantees you a battery with at least 75% of its stated new capacity. The hire contracts are subject to mileage limits, too.

If you climb off a scooter and jump into a Twizy, the cocooning cockpit will seem as safe as houses. Get into a Twizy from a conventional car, and you’ll likely be less impressed. Still, there’s no doubt Renault has gone to town making sure the Twizy is as accident-proof as reasonably possible.

You sit within a tough tubular metal safety cell developed by Renaultsport – which has plenty of experience with roll-cages – and there’s a four-point seatbelt for the driver and a three-point belt for the passenger.

Brakes are discs all round – without any anti-lock function – and the driver gets airbag protection in the case of a frontal impact. Car-like features such as the high rear brake light, proper wing mirrors and even a hands-free Bluetooth phone kit all help on safety front, but there are downsides like poor rearward visibility that need to be factored in.