The Renault Twizy has a modest range by electric car standards, but it’s quick to charge 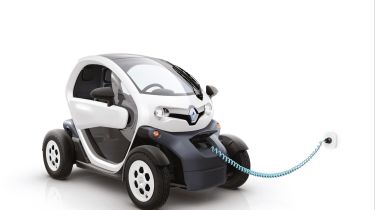 The battery in the Twizy is relatively small, but it provides enough juice for a real-world range of 40-50 miles on a charge. It seems unlikely that many owners could want more – this is never going to fit the bill as a long-distance cruiser – and the quick and easy charging is a bonus, too.

Renault’s official figures suggest it should be possible to drive up to 62 miles on a charge in the Twizy. That's useful for making comparisons with other electric cars' official test results, but our experience in the real world is that an actual range of between 40 and 50 miles is more likely.

Still, that’s a greater distance than most people would choose to commute on a scooter, and makes the Twizy a viable mode of transport for urban users with a regular daily journey to work or even a school run. Just remember, however, that you won't be able to filter through traffic as the Twizy is much wider than a motorbike or scooter.

The Twizy has a battery stowed under the driver’s seat, with a relatively small 6.1kWh capacity. While this limits ‘official’ range to 62 miles, it does mean you can charge the battery relatively quickly from a normal domestic socket. Plug into using the cable supplied and you can be back up to a full charge from empty in around three-and-a-half hours.

You can’t charge the Twizy any faster, even at a public-fast charging station because, although you can buy an adaptor cable to hook up to Type 2 fast-charge outlets, the Twizy’s on-board electronics will only draw power at one rate. The big 22kW rapid chargers with tethered cables you find at motorway services aren't compatible with the Twizy.

The Twizy and its battery/electric motor are covered by Renault’s five-year warranty. Previously, the battery was excluded from this, as owners who registered their Twizy before the start of 2020 had to lease their batteries from Renault and therefore were protected from battery failure under the terms of their contract. It must be pointed out, though, that even then, Renault only guaranteed to provide a battery with at least 75% of its original stated capacity.