The Twizy should handle enough shopping to make dinner for two 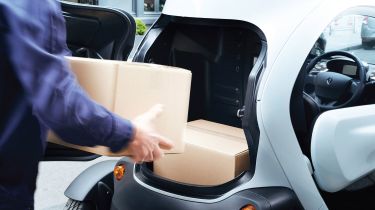 Of course, the Twizy doesn’t stand comparison with even the most space-restricted city car when it comes to luggage carrying. Or people carrying, come to that. But if you’re looking at the Twizy as a potential alternative to a scooter, the picture is rosier.

Still, any advantage in comfort and carrying capacity must be set against the Twizy’s intrinsically less nimble dimensions. It’s too big to sail between rows of traffic in city jams, and less easy to park than a scooter, too.

The front seat of the Twizy is surprisingly roomy and comfortable, with even six-footers having little cause for complaint. The driving seat slides backwards and forwards, although you can’t adjust the steering wheel angle, so your knees may get in the way.

The rear seat is space is much more compromised, and while tall adults will still fit, passengers of any size have to sit with their legs splayed around the driver’s seat. The driver also has to get out first, as the front seat needs to be pushed forward to exit the rear seat. Once ensconced in the back, though, it feels secure and rather snug – a child would happily sit there for the school run, but they’d need to be wrapped up well.

There are twin gloveboxes either side of the driver’s console offering a total of eight litres of storage, and there’s a lockable box with 31 litres of space under the rear seat. It’s not great, but that’s similar to the luggage volume you’ll find inside many scooter top-boxes.

You may wonder why Renault hasn’t thought to fit some sort of boot to the rear of the Twizy, but it’s all down to load capacity. To qualify as a heavy quadricycle under EU law, there’s a maximum load capacity of 200kg – two large adult occupants could easily breach that limit on their own. Renault does offer a 50-litre luggage bag designed to strap into the rear passenger seat, which it says is large enough for a weekly shop.

The single-seat Twizy Cargo does have a boot, however the rules for ‘commercial-vehicle’ quadricycles allow for a larger carrying capacity – but no passenger.