Many brands now have an electric car in their line-up, but that doesn't mean the wave of new arrivals to the market is showing any signs of slowing down. Here's what's in store...

The electric vehicle has well and truly arrived in the UK, with charging points popping up all around the country and the choice of models to buy right now ranging from affordable and practical city cars like the Volkswagen e-up! to luxurious, expensive and technologically advanced sports cars like the Porsche Taycan.

But the motor industry isn't known for resting on its laurels, and the current crop of zero-emissions motors is set to expand even further over the next 12 to 18 months as more brands get in on the act and manufacturers that already have an electric car on sale look to expand their range. And it's not just cars – take a look at our list of electric vans coming soon, too.

Here, we take a look at some of the most important and exciting electric-car arrivals due in 2021... 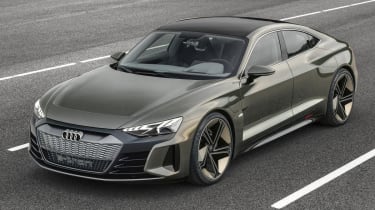 Audi's first foray into electric cars was the large e-tron SUV, but it has a swoopy A7-sized four-door electric coupe to rival the Tesla Model S and Porsche Taycan in the works, too. A prototype version (pictured above) appeared at the 2018 Los Angeles Motor Show, while a disguised production version has been spotted by spy photographers, undergoing cold-weather testing. The prototype GT had a 96kWh battery and two electric motors, producing 582bhp for a 0-62mph time of 3.5 seconds. UK pricing is expected to be in the region of £100,000, with sales starting in 2021 following the car's reveal late in 2020. 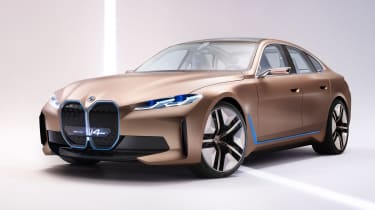 BMW has definitely taken note of the Tesla Model 3's disruption of the compact executive-car class; the American car offers compellingly low running costs and high-tech appeal for the same price as a high-spec diesel 3 Series, or its key rivals the Audi A4 and Mercedes C-Class. BMW's answer to the Tesla will come in the form of this i4: an electric version of the new BMW 4 Series Gran Coupe. We've looked in depth at how it stacks up against the Tesla here and it seems like a close fight is in prospect. A 523bhp electric drivetrain fed by an 80kWh battery pack will give a circa-375-mile driving range, with 0-62mph done in around four seconds. Production is due to start in 2021.

Read more about the BMW i4 here 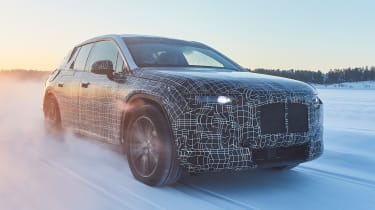 BMW is launching a whole slew of electric models in the near future, with this large iNEXT SUV set to be the biggest of the lot. As a production car, it could wear an iX5 or iX7 badge, but that hasn't been officially confirmed yet. As with the Audi e-tron GT above, it has already been previewed in concept form by BMW as the 'Vision iNEXT' while the appearance of both official and unofficial photographs of camouflaged test cars indicate that the production version is in the advanced stages of development. No technical details have been released by BMW, beyond the fact that it's targeting a driving range of more than 370 miles for the car. 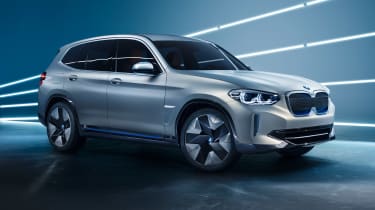 The X3 is one of BMW's most important internal-combustion-engined models, so it's not surprising to see the German manufacturer is working on a fully electric version. A motor-show concept (pictured above), spy photos of almost completely undisguised test cars and seemingly official leaked images on Instagram have all appeared, leaving little doubt about what the production version will look like. Exact technical and performance details have yet to be revealed, but BMW has hinted at a battery capacity of more than 70kWh, a power output in excess of 500bhp and a driving range in the region of 250 miles for the car. A retail price north of £60,000 is expected.

What will almost certainly be one of the cheapest cars on this list when it goes on sale could also turn out to be one of the most important. The Dacia Spring Electric – based on the Chinese-market Renault K-ZE crossover – is set for Europe and is intended to undercut the current cheapest electric car you can buy (a Skoda Citigo iV without rapid-charging capability for £17,495) by a large amount. It could open up practical electric-car ownership to many more people, with an anticipated 124-mile driving range. And you may not even need to buy one – Dacia says it will be targeting car-sharing companies as well as retail buyers when the Spring launches in 2021. 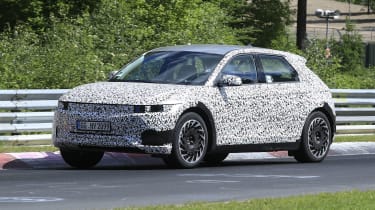 Hyundai has gotten off to a good start with its electric offering to date: we rate the Ioniq Electric hatchback and Kona Electric SUV highly. The South Korean company won't be stopping there, however; it plans to launch a sportier and more stylish zero-emissions car in 2021 in the shape of this 45. Likely to be more expensive than the Ioniq and Kona, and aimed at a more premium market, it's based on a 2019 Frankfurt Motor Show concept that drew inspiration from the angular lines of Hyundai's first car, the 1974 Pony Coupe Concept.

Read more about the Hyundai 45 here 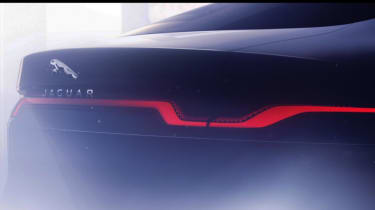 Luxury cars are obvious beneficiaries of the shift to electric power, as they have always focused on providing as smooth and quiet an experience for occupants as possible. With the next-generation BMW 7 Series set to offer a fully electric option and Mercedes preparing its EQS electric saloon, Jaguar is following a similar tack with an electric version of its next-generation XJ flagship – a favourite with government and VIP users around the world. A teaser photo of the car's rear has been shown (above) and development cars wearing camouflage have been spotted in the wild. The XJ will join the I-Pace SUV in Jaguar's electric line-up and is set to be built at the firm's Castle Bromwich factory, which will become a hub for the production of electric drivetrains and models in the coming years. 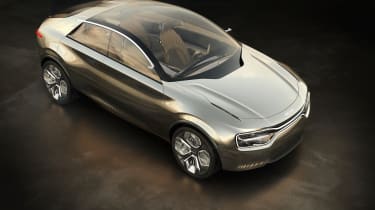 Kia and sister brand Hyundai have big plans in the area of electrification over the coming years, with Kia planning to launch 11 new zero-emissions models by 2025. They'll be headed up by a flagship, Tesla-rivalling SUV based on the 'Imagine by Kia' concept (pictured above). Its promised specs are impressive, with a 310-mile driving range and ultra-rapid 350kW charging capacity for a recharging time of less than 20 minutes. Expected to cost in the region of £50,000, the new electric Kia will appear in early 2021 and go on sale in spring of that year. 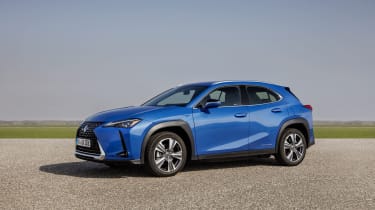 Late in 2019, Lexus revealed a battery-electric version of its compact UX model. A 54kWh battery will return a claimed driving range around 186 miles; drive will come from a single 201bhp electric motor that'll give the small SUV a 0-62mph time of 7.5 seconds. Charging will be capped at a maximum of 50kW, which will deliver an 80% top-up in around an hour. Lexus is also promising to offer an unprecedented million-kilometre warranty on the car's battery. 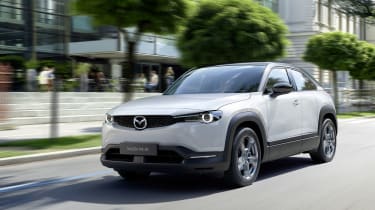 This is Mazda's first fully electric production car, first revealed at the Tokyo Motor Show in 2019. It boasts eye-catching styling and BMW i3-esque pillarless doors. A 35.5kWh battery supplies enough power for a range of just over 120 miles. A 141bhp electric motor drives the front wheels and we’d expect the MX-30 to hit 0-62mph in eight to 10 seconds and have a top speed in the region of 100mph. Initially, the range will be limited to a 'First Edition' model, costing from £27,495 including the government’s plug-in car grant, with pre-orders being taken now and deliveries anticipated in early 2021.

Mercedes' assault on the electric-car market began with the large EQC SUV, but now that technology is set to find its way into smaller and more affordable models, including this EQA. An electric equivalent to the GLA compact SUV, the EQA has so far only been seen in official and unofficial pictures wearing a heavy disguise, but the Concept EQA revealed at the 2017 Frankfurt Motor Show hints at what the production version will be like. The EQA will be a direct rival for the Tesla Model Y and Volvo XC40 Recharge P8; we'll probably see it unveiled in late 2020 before sales commence in early 2021. 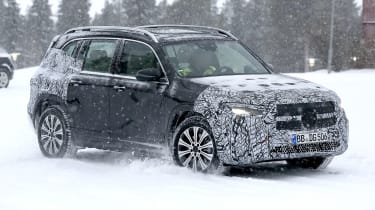 While the Mercedes EQA above aims to offer a sleek hatchback shape, the EQB will essentially be an electric version of the recently unveiled Mercedes GLB, which brings the bluff and boxy styling of larger Mercedes SUVs like the G-Class and GLS to a smaller and less expensive format. As part of Mercedes' plan to have eight electric 'EQ' models on sale by 2023, the GLB is expected to arrive in showrooms at some point in 2021. A starting price of around £45,000 is likely. 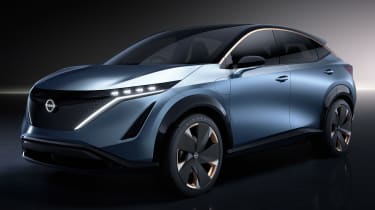 Officially, the Nissan Ariya is just a concept for now, shown off by its maker at the 2019 Tokyo Motor Show. But leaked patent drawings suggest the Japanese brand is working on a production version of this Qashqai-sized electric SUV. There are still no details on the production Ariya’s drivetrain, but it’ll be built on a platform developed by the Renault-Nissan-Mitsubishi partnership – one which will also form the basis of a similar model from Renault, based on the Morphoz concept. 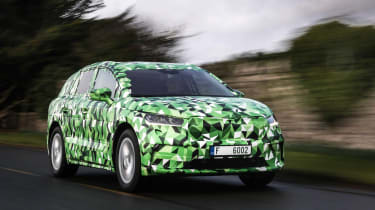 The Volkswagen Group's MEB electric-car platform is giving all the brands under that group's umbrella the opportunity to develop their own electric models. Skoda's take is the Enyaq iV, a large coupe-SUV concept whose styling was previewed by the Vision iV concept. We've already driven a disguised pre-production version of the Enyaq and the covers are set to come off some time this summer, with customer deliveries commencing in early 2021. It's roughly the same size as Skoda's Kodiaq SUV and is expected to start at around £35,000 on the road. 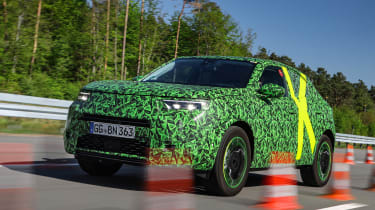 Vauxhall and its parent company Opel are these days part of the PSA Group – which also oversees French brands Peugeot, Citroen and DS – so it has been able to benefit from the group's electric powertrain technology. The first model to come out of this is the Vauxhall Corsa-e supermini, a sister model to the Peugeot e-208. The larger Peugeot e-2008 SUV will also have a Vauxhall equivalent in the shape of this Mokka-e. Whether in electric or petrol form, this new Mokka is set to be a radical departure from its predecessor, featuring a cleaner "detoxed" design language and a "fully digitised" interior. Expect to see it before 2020 is out, and for it to appear in showrooms in early 2021. 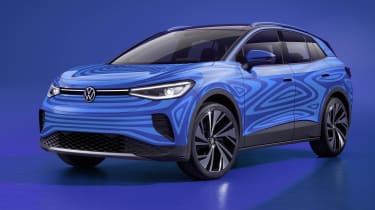 Closely related to the 2020 Volkswagen ID.3 hatchback, the Volkswagen ID.4 will be the first all-electric SUV from the brand. A similar size to the popular Volkswagen Tiguan SUV, the ID.4 will offer a range of more than 300 miles in top-spec form, while power will be the equivalent of around 302bhp. The car also gets four-wheel drive and – in ID.Crozz concept form at least – features a 515-litre boot. Expect productions to start in late 2020 with customer deliveries in early 2021.