The MINI Countryman hybrid will be cheap to run, especially for company-car users, but comparable rivals are a bit cheaper 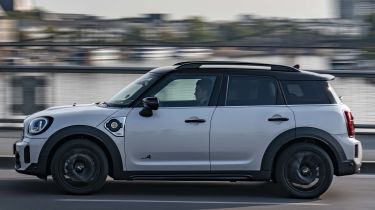 Although the Countryman is smaller than a Mitsubishi Outlander PHEV, it costs several thousand pounds less, as well as being far better to drive and more stylish inside and out. The appeal is clear. Even so, rivals like the Kia Niro PHEV are cheaper despite being better equipped and slightly more efficient.

Finance options on the MINI are also expensive, and you'll struggle to get monthly payments down to under £500 per month, even with a healthy deposit or part-ex to trade in.

There's no insurance information for the facelifted plug-in Countryman yet, but the outgoing model sat in insurance group 26, making it the most expensive Countryman aside from the range-topping JCW model to insure. We expect the new car won't deviate much from group 26; this means it could look pretty costly when you see that no plug-in version of the Kia Niro or Hyundai Ioniq sit higher than group 13.

MINI provides the same level of cover as parent company BMW on every new car: a three-year/unlimited-mileage warranty. That’s pretty much par for the course these days, but it’s not hard to find companies that provide longer cover on their hybrids. Kia, Hyundai and Toyota, for example, offer at least five years’ cover.

You can’t directly extend MINI’s basic cover. But, once it expires, you can take out a MINI Insured warranty. There are three levels of cover to choose from, but none will cover a car with more than 100,000 miles on the clock.

Again, MINI follows BMW and how often your car needs servicing will depend on how it’s driven. Doing lots of short trips could well end up with the car needing more frequent attention than one that spends more of its time cruising on main roads.

If you want to ease the costs of servicing, the 'MINI tlc' package is very tempting. For a one-off fee of £299, it covers all your servicing for three years and 36,000 miles. The package also includes MINI MoT Protect, which means the company will cover the cost of repair or replacement on several parts – as well as the labour costs – if your car fails its first MoT.

After the first year's CO2-based road tax (generally included in the on-the-road price), the MINI Countryman plug-in hybrid will cost £140 a year to tax. If you push the car’s price above £40,000 with options, it'll cost an extra £325 in road tax on top of this flat rate in years two to six of ownership.