The MG ZS EV isn't a long-range champion, but it should be more than sufficient for most families' weekly motoring 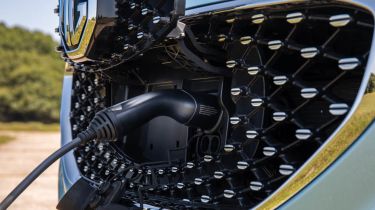 The ZS EV has a 44.5kWh total battery capacity, but only 40kWh of that is usable so its range isn't quite as long as some electric cars, but the 163-mile real-world range is comparable to rivals like the Nissan Leaf and more than enough for most electric car owners.

It doesn't take too long to charge up, either, whether you're using a public rapid-charging station or a home wallbox charger. The only thing that detracts from its star rating here is the lack of timed charging and no charge-point search function in the sat nav.

A range of 163 miles is quoted for the ZS EV based on the latest independent testing, and we found it got very close to that in sedate, real-world driving in warmer months.

Lots of motorway miles or cold weather will likely see that drop to more like 130 miles, but this is all competitive with rivals like the Nissan Leaf and BMW i3.

Because the ZS EV has a relatively small battery, charing times are pretty fast: it's compatible with both CCS and Type 2 chargers and the charging ports are located inside the front grille.

The MG can top up at 50kW CCS rapid chargers, which are common in motorway services and will deliver 100 miles of range in around 30 minutes, while overnight charging at home from a 7kW wallbox charger will take just over six hours.

You get a three-pin cable that's useful for trickle-charging on visits to relatives and friends, although it'll take 17 hours to fully charge this way, but you pay extra for an eight-metre Type 2 cable more commonly used for charging from wallboxes or public points.

It's a shame the MG can't take a 100kW charge (which would deliver 100 miles of range in 15 minutes), as the Kia e-Niro and Leaf e+ can do, and also that there's no timed charging to take advantage of off-peak electricity tariffs.

Most other electric cars have this, and many even have phone apps to make it even easier to control and monitor charging, but the MG has none of that, and you can't even search for charging stations using the sat nav. There's also no battery percentage readout (only an old-fashioned fuel-gauge style readout) and no indication of the charging rate when the car is plugged in.

Even the illuminated MG badge on the grille, which pulses to tell you that the car is charging, is almost impossible to see in daylight, so there's a general sense that a lot of the important details you expect from an electric car have been overlooked.