With 25 miles of electric range, the Mercedes S 560 e L is an impressive plug-in hybrid, but it comes at a hefty cost 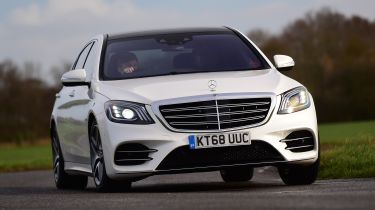 The Mercedes S-Class is designed with one thing in mind: to be the best luxury limousine money can buy. After a hiatus, plug-in hybrid (PHEV) technology has returned to the S-Class line-up in the form of the Mercedes S 560 e L: it features a 3.0-litre, turbocharged, six-cylinder petrol engine working in tandem with an electric motor to produce 469bhp.

That translates to a 0-62mph time of exactly five seconds, with the top speed electronically limited to 155mph. But in PHEV form, there’s more to it than that: the S-Class boasts a 13.5kWh battery, which can be charged from a domestic three-pin socket in five hours or via a 7.4kW home wallbox charger in around 90 minutes.

In pure-electric mode, the S-Class plug-in hybrid still produces 120bhp from the electric motor and can reach speeds of up to 80mph. In total, it’ll return around 25 miles of zero-emissions range. The plug-in hybrid powertrain is well suited to the S-Class, delivering a smooth, near-silent drive around town through a silky nine-speed automatic gearbox. There’s plenty of performance on tap, too, for bursts of acceleration when needed.

At higher speeds, the petrol engine kicks in seamlessly, with the S-Class settling nicely into a motorway cruise. Even with the engine running, you’d be hard-pressed to identify the sound of the six cylinders working away above the wind and tyre noise. It’s that good.

It’s frugal, too, returning an economy figure between 108 and 113mpg in the latest WLTP test procedure. It goes without saying that you’ll need to keep the battery topped up regularly in order to hit those numbers, but if short commutes are your thing, you should have no trouble running on electric power most of the time.

Inside, the S-Class ticks all the boxes for passenger comfort, with no corners cut in the pursuit of a luxury experience. Leather upholstery is standard, with plenty of legroom and headroom in the front and rear seats. A 12.3-inch digital instrument cluster sits next to a 12.3-inch infotainment screen on the dashboard, with sat nav and countless other features included. Apple CarPlay and Android Auto smartphone connectivity are among them.

From a driver’s point of view, there are only two minor drawbacks to the S-Class plug-in hybrid: the brake pedal travels a little further than feels necessary, and the 13.5kWh battery pack makes its weight known in corners, where the handling is less sharp than in lighter versions of the car. 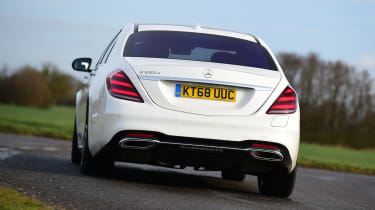 These are only small foibles, however; if you’re a passenger in the S-Class PHEV (many owners will be chauffeured around in the rear) you won’t notice the difference. More serious is the battery pack’s intrusion into the boot space. Most S-Class models have a useful 510-litre luggage capacity, but this falls to 395 litres in the plug-in hybrid. The fact that those with lots of baggage would be better off with an average family hatchback counts strongly against the S-Class PHEV.

Then there’s the price. The S-Class plug-in hybrid costs £20,000 more than the non-hybrid diesel version, a staggering mark-up given the latter is normally the limousine of choice for long motorway journeys. But if you’re based in a city, it might be a price worth paying: official CO2 emissions of 59g/km make the S-Class plug-in hybrid exempt from the London Congestion Charge until October 2021 and the prospect of all-electric running could slash running costs over the lifespan of the car. Better still, the S-Class PHEV attracts a very low company-car tax rate compared to the diesel model.

The BMW 745Le is a serious rival for the S-Class, as is the plug-in version of the Audi A8. But the S-Class can give both a very good run for their money. For more, read the rest of our in-depth review.