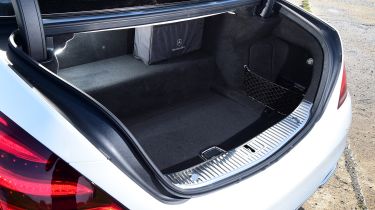 The Mercedes S-Class plug-in hybrid will seat four adults in supreme comfort, with the rear bench incorporating room for a fifth passenger. However, there’s less space in that middle seat, so it’s unlikely to meet the needs of business passengers with high standards if you’re travelling with five adults.

The S-Class is immensely comfortable, with oodles of legroom in both the front and rear seats. Headroom is plentiful, too, and only the tallest of adults might struggle with the sloping roofline of the saloon.

All seats are power-adjustable as standard, with leather upholstery throughout. The front seats are heated, with memory settings to store favoured positions, and the front passenger also receives additional four-way lumbar support.

As the S-Class hybrid is only available as a five-door, access is easy for all passengers. And among the options is a power assistance feature that'll open and close the doors automatically, making getting in and out even easier.

Interior storage is adequate, but not exceptional. There’s a sizeable cubby in the front central armrest, with another space for smartphones and smaller objects below the dashboard.

There’s a glovebox ahead of the front-passenger seat, too, while the back of the rear middle seat can be folded down to reveal a compartment behind. This acts as an armrest for rear passengers, with cupholders incorporated into the design.

The S-Class plug-in hybrid features a 395-litre boot. This is enough for a modest amount of luggage, but is still below par for the class.

Case in point: the petrol and diesel versions of the S-Class come with 510 litres of boot space, made possible by the fact that they aren’t carrying a 13.5kWh battery like the PHEV model. This will be a big stumbling block for some buyers, and you’ll need to consider how much you’re likely to need to carry in the back.

The boot itself is wide but not particularly deep, with a stepped shelf at the back. You should also bear in mind that some of the boot space is taken up by a bag carrying the S-Class plug-in hybrid’s eight metre charging cables, reducing the available room even more.