The Mercedes S-Class hybrid promises 25 miles of electric range, and up to 113mpg fuel economy 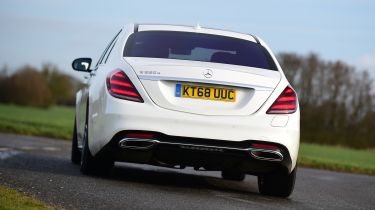 The Mercedes S-Class plug-in hybrid promises fuel economy that its petrol and diesel siblings can’t match, although you pay a sizeable premium for the privilege. Fortunately, PHEV technology suits the comfortable, luxurious approach of the S-Class; something that can’t be said for many other plug-in vehicles.

The Mercedes S-Class features a 13.5kWh battery, which the carmaker claims will return up to 25 miles of pure-electric range on a single charge. For city dwellers and those with short commutes, this will be enough for low-cost electric running most of the time, although PHEVs with better electric range are available elsewhere.

Officially, the S-Class returns between 108 and 113mpg, figures which have been derived from the latest WLTP efficiency test. Naturally, you’ll need to keep the battery topped up regularly to see anything like those numbers, but doing so will see the 3.0-litre petrol engine left unused during shorter trips.

Quoted CO2 emissions are also suitably low, with the S-Class emitting 59g/km on paper. This is enough to earn exemption from the London Congestion Charge zone, potentially saving owners £11.50 per day in the capital from Monday to Friday. However, bear in mind that only vehicles that are entirely zero-emissions will qualify for exemption after October 2021. After that date, plug-in hybrids like the S-Class will need to pay the daily charge.

The S-Class hybrid should charge fully from a domestic three-pin socket in five hours, with a 7.4kW home wallbox charger cutting that figure to about an hour and 15 minutes. A set of eight-metre-long charging cables is included with the car.