With practicality hampered by stylish doors, the Mazda MX-30 isn't exactly the most flexible SUV around 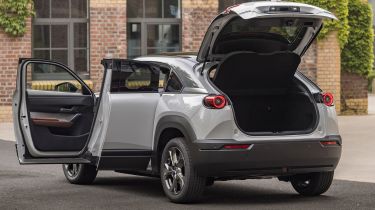 Despite its status as an SUV, the Mazda MX-30 has more of a city-car-like electric range. This means it's most likely to be bought by those regularly undertaking shorter journeys and with access to a denser network of fast chargers to stay topped up. This sort of use means largely urban driving, as opposed to longer trips with a full complement of luggage and passengers.

So, whether or not the MX-30 is practical enough for you will depend on how you plan to use it. It's a great half-step up from most electric city cars in this regard, mostly if you only plan to carry children in the back; those after a more traditional family SUV with the ability to carry five in comfort will be better off elsewhere.

Those sitting up front in the stylish, well built cabin will be perfectly comfortable, with plenty of space, interesting materials and clever hidden cupholders that act as a cork-lined tray for items when not in use – and there's another of these under the centre console too. A well placed centre armrest joins two on each door and the overall result is a nicely considered design that puts its occupants first.

Things aren't quite as ideal in the rear quarters, however: the same tiny, privacy-glass windows and large C-pillar that restrict rearward visibility make the back seats a fairly dark and claustrophobic place to sit. Access through the rear-hinged doors (which work only after the front doors are opened) isn't as easy as you'd expect, either. It's not a problem for the average child who's most likely to occupy those seats, but adults may struggle, especially if they have mobility issues. Fitting child seats should be easy, however.

The result is a car that's larger than the average electric five-door supermini yet not quite as easy to get in and out of – at least for rear-seat passengers. As a taller-riding alternative to those cars, the MX-30 makes sense – but less so as a rival for some more sensible electric SUVs.

There's 366 litres of boot space including the underfloor storage that's most likely to be used to carry charging cables, with a total of 1,171 litres available with the rear seats folded down (with a 60:40 split). The MX-30 sits between sizes in the electric-car market and so can't match larger SUVs like the MG ZS EV (448 litres), but offers a bit more flexibility than an electric supermini like the Vauxhall Corsa-e (309 litres).