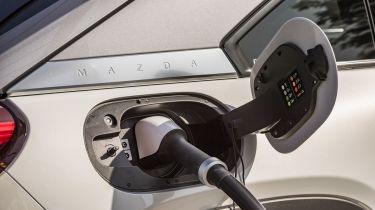 The Mazda MX-30 is fitted with a 35.5kWh battery, which to many will seem small next to rivals like the Peugeot e-2008 (50kWh) and Kia e-Niro (39 or 64kWh). However, according to Mazda, this size of battery offers the best compromise between the environmental costs of manufacturing the cells and benefits to the consumer.

In other words, Mazda has opted to minimise impact on the environment by using up fewer of the earth's resources (including rare-earth materials like lithium and cobalt), while also ensuring speedy charging times to help appease those making the switch from quick-to-refuel internal-combustion cars.

We like the approach, but accept that some rivals simply offer more flexibility when it comes to range versus charge time: whether the environmental aspect is a factor in the buying process will ultimately depend on personal preference.

The smaller-than-average 35.5kWh battery means a shorter-than-average range of 124 miles – or 165 miles around town according to Mazda. The standard figure is less than you get from the Honda e city car (127 to 136 miles) and considerably short of the Peugeot e-2008's 191 to 206 miles.

One of the benefits of a small battery is quick charging times: the MX-30 can achieve an 80% top-up from a 50kW public rapid charger in little over half an hour, which is great news for those using their cars around town or on longer trips with brief service-station stops. Even drawing power from a home wallbox, the Mazda will be fully juiced in less than six hours, so it'll be easy to get all your charging done within the window for off-peak electricity costs. If you're caught short, the MX-30 will take 15 hours and eight minutes to charge using a three-pin cable plugged into a domestic socket.