You get plenty of tech in the Lexus RC 300h, but it’s not the easiest to use 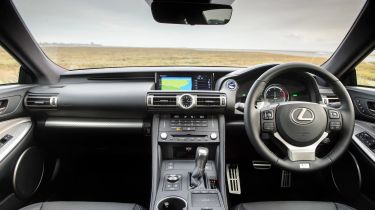 The RC is basically a two-door coupe version of the Lexus IS saloon, and nowhere is that more obvious than from the driver’s seat. Mind you, that’s no bad thing, as you’ll at least be comfortable while sitting there. Lexus seats are always excellent and the good ride quality is a boon, too.

It also means you have a very well-built cabin, although it doesn’t have quite the sheer class you get in, say, an Audi or Mercedes. And, despite some clever little touches, it’s often a case of form over function: yes, it looks good, but it’s not always the easiest to use.

Anyone familiar with the inside of a Lexus IS saloon will be totally at home in the RC, because the dashboard is pretty much a carbon copy of what you’ll find in that car. You certainly won’t have anything to complain about in terms of how well it’s built or the quality of the materials the company have used. However, in the cold light of day, it doesn’t quite have the sheer class and design flair you’d find in an Audi or Mercedes.

That’s not to say there aren’t some nice touches, with the LED interior lighting giving it a classy air. But, the ventilation controls on the centre console are typical of the car’s slight lack of attention to detail. They’re metallic strips that you swipe your finger along to change the temperature, and they look great, but they’re not as easy to use as the more usual knobs – especially when the car is moving.

The RC is pretty pricey, but at least it’s well equipped for the money. Following revisions to the range for 2019, there are now three trim levels: the basic RC, as well as F Sport and the flagship Takumi model.

The RC comes with 18-inch alloy wheels, the Lexus Safety System+, front and rear parking sensors, a reversing camera, smart entry and the Lexus Premium Navigation system. Leather upholstery is an option, but buyers should be aware that they won’t need to add too many options before the list price (which starts at £38,000) rises to over £40,000, which will increase their annual road tax bill for the first five times the car is taxed.

The sad truth is that Lexus isn’t up with the best car makers for infotainment at the moment. For example, there's a nice 10.3-inch screen sitting at the top of the centre console, but the graphics aren’t that great and it’s not a touchscreen. Instead, you control all the various features, such as the sat-nav, stereo and so on, using a small touchpad down by the cupholders.

It’s very different to the systems you’ll find in any of its rivals, but you’ll soon find out why. It’s awkward and immensely frustrating to use, because it’s very difficult to ‘aim’ the cursor on the screen with any degree of accuracy, especially when driving.

What’s more, you don’t have access to the same kind of smartphone connectivity (Apple CarPlay and Android Auto) that you do on rival cars. So, there are no apps on your smartphone that you can use in the car and no way to communicate with your car, as you can with a BMW, for example.

Bluetooth connectivity, allowing you to make and receive calls (using the controls on the steering wheel), as well as letting you stream music from your phone is as good as it gets in an RC.