Fuel consumption aside, the LS 500h's hybrid nature does little to rein in running costs 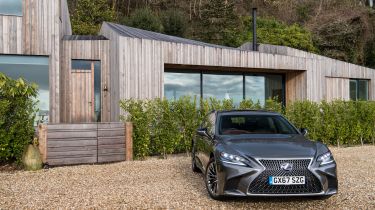 At around 36mpg, the fuel consumption of the Lexus 500h may match or beat its petrol and hybrid rivals, but aside from a (Lexus-claimed) unusually low rate of depreciation, other running costs fall squarely in line with what you'd expect of a big, heavy, petrol-powered luxury saloon.

Even the entry-level model is priced at well-over £70,000, and the "self-charging" LS 500h doesn't qualify for any form of plug-in car grant. As mentioned in the section above, it offers company-car drivers a slight BiK advantage over its petrol and diesel rivals, but comes nowhere near matching plug-in hybrid models in this respect.

Consumable items such as tyres and brake parts will prove very costly if you make frequent use of all the car's performance, and service intervals are a relatively frequent 10,000 miles apart. Despite its hybrid nature qualifying the LS 500h as an 'alternative-fuel car', you'll still be liable to pay the London Congestion Charge if you enter the capital.

The Association of British Insurers (ABI) has placed the entry-level Lexus LS 500h in insurance group 47, rising to 50 for the top trim level. It's worth seeking an insurance quote before you make a decision to buy, as the cost will vary depending on your circumstances and location.

When your warranty expires, it can be extended at a cost of £1,495 for an additional year, or £2,395 for 24 months more cover. If you expect to cover more than 60,000 miles during the three years of your standard warranty, an extended warranty removes any mileage ceiling as well as providing an additional 12 or 24 months of coverage. A Lexus extended warranty can be applied to any car that's under 10 years old and whose mileage doesn't exceed 140,000.

Relatively frequent service intervals mean the Lexus LS 500h will need to visit a workshop more often than its German rivals. An intermediate service will be required every 10,000 miles, with a major service every 20,000 miles. A "Full 100" service comes at 100,000 miles, which includes a coolant change.

Every service includes a 'hybrid health check', which also covers the battery with a year or 10,000-mile warranty. Lexus service prices are standardised between the brand's official workshops, so there's no need to shop around – just choose which of the brand's 44 UK branches is most convenient for you.

Large luxury saloons like the Lexus LS 500h and its rivals tend to rank among the fastest-depreciating cars you can buy, yet Lexus has predicted that its most expensive saloon will retain a very impressive 53% of its value after three years. This figure doesn't tally with predictions from industry experts, who reckon 48% is more like it.

Having been on sale for less than a year, it's difficult to confirm how accurate this prediction is. Approved-used prices of the car's LS 600h predecessor appear commensurate with predictions, but the trade-in value you're given may vary depend the mileage and condition of your car, as well as market conditions.