Lexus has become legendary for its owner satisfaction, and the LS 500h is packed with safety equipment 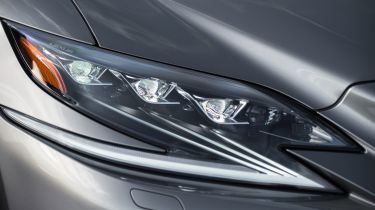 Perhaps it's because Lexus has a relatively small share of the UK's car market, and that allows it to lavish its individual customers with more attention, but however it achieved it, the brand enjoys an unequalled reputation for owner satisfaction. Lexus is renowned for its sophisticated technology, too, and nowhere is this more clear than on the list of standard safety equipment.

The Lexus LS has sold in relatively small volumes in recent years, and the latest model was introduced too recently for it to have featured in our sister title Auto Express' 2018 Driver Power survey. The Lexus brand, however, was well represented and it's clear that owners are generally very satisfied indeed.

Lexus came home in first place overall out of 26 brands scrutinised in 2018. Owners said great things about the interior design, quality and comfort of its cars, and also feel that no other brand makes a safer car. Lexus also beat all comers where it comes to general build quality and reliability, despite 9% of respondents reporting at least one fault with their car in the first year of ownership. A second-place finish in the engine and gearbox category impresses, too, with running costs and infotainment rated only a little less highly in fourth and eighth places respectively.

With Lexus expecting to sell no more than 100 examples of the LS 500h every year, it's unlikely that it'll ever face independent crash-testing by expert body Euro NCAP. The same is true, though, of the Mercedes S-Class and BMW 7 Series.

That doesn't mean the LS 500h is unsafe, though – far from it. Aside from the undoubted quality of its construction, the Lexus is packed to the roof with sophisticated safety features designed to mitigate the likelihood of a crash occurring in the first place.

Every model has radar cruise control that can match the speed of the car in front, while  lane-keeping assistance can warn if you're drifting out of lane, before adjusting the steering to tuck the car back in line. There's road sign recognition, too, and an adaptive high-beam system that can adjust the light cast by the car's LED headlamps to avoid dazzling oncoming traffic.

The Premier model also has a pre-collision system that can instruct the car to swerve around an obstruction in the road if sensors detect that it's safe to do so. It also boasts CoDrive – a semi-autonomous driving mode that makes long-distance journeys more relaxing by looking after acceleration, braking and steering so long as you keep both hands on the wheel.