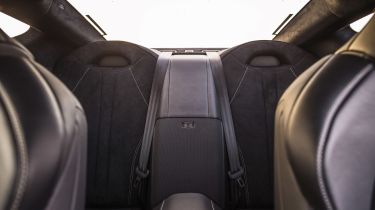 In spite of the car's sizeable exterior dimensions, the LC's design and engineering teams weren't that generous when it came to accommodating people or their luggage. So if you want to enjoy the LC on a trip away, it's best to leave the kids at home and use the cramped rear seats for extra baggage that won’t fit in the miserly boot.

The driver and passenger sit low in the LC, and a long way back from the nose – two reasons why there’s so little room in the back. Even children will struggle to get comfortable, let alone adults – in fact, front-seat passengers will likely have to give up some of their legroom to accommodate anyone in the rear.

That would be a shame, as the front seats in the Lexus are superbly comfortable and plush, even with the extra bolstering on the Sport trim level. With space all around and the luxurious nature of the fixtures and fittings, not to mention the car’s admirable refinement when cruising, it’s hard to think of a sporty interior  that offers as much comfort. It’s lovely to look at, but even if you’re using the rear seats for bags and not people, the LC doesn’t do that well for cubby and oddment space.

To be fair, grand touring 2+2s don’t tend to offer a vast expanse of luggage space, but while the V8-engined Lexus LC 500 has almost 200 litres of boot volume, the 500h only manages 172 litres, as space is gobbled up by the batteries. For comparison. different varieties of Porsche 911 offer between 125 and 145 litres, while the Mercedes S500 Coupe has 400 litres. The Lexus isn’t too hard to load, though, as once you’ve hauled your bags over a high sill, there’s a big opening.