With similar performance, the hybrid Lexus LC knocks spots off the V8 model for MPG and CO2 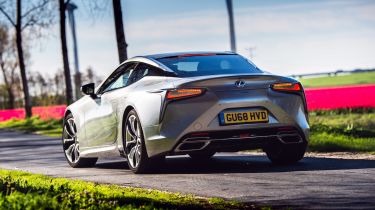 If you look at it from the perspective of saving the planet, the Lexus LC 500h is no great shakes. Look at it as a genuine high-performance car, and the figures are a lot more impressive.

Fuel economy is much better in the hybrid than in the V8 model, with a figure of 34.8mpg sounding a lot more attractive than the V8’s 24.4mpg. That said, both figures require drivers to adopt an unusually light right foot if they’re to be attained, and our experience leads us to expect real-world figures in the teens for the petrol model and early-to-mid 30s for the hybrid. Whichever way you look at it, the hybrid model scores highly in comparison.

All models come with a decent-sized 82-litre petrol tank, which using the official figures would result in a cruising range of around 700 miles for the hybrid. You can dare to dream that’s true, but our experience suggests something over 500 miles is more achievable from a cautiously driven LC 500h, compared to a little over 300 miles for the standard V8. Start to enjoy the performance and things go downhill rapidly in either case.

The idea of adding an electric motor to a petrol engine in a self-charging hybrid like the Lexus LC 500h is to increase performance without burning more fuel. As a result, when judged against a like-for-like rival model without an electric motor to help it along, you can expect to see big advantages in fuel consumption and related emissions.

Thoughtfully, Lexus builds a conventional 5.0-litre V8 version of the LC, so the comparison is even more stark. Tailpipe emissions from the hybrid are much lower, with the standard trim rated at 184g/km. Move up to the bigger wheels of the Sport and Limited Edition models and that figure rises. The best the 5.0-litre model can do is 265g/km.